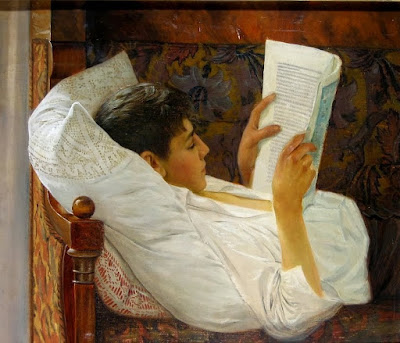 This was a good week to be reading mysteries and poetry. There are several links to poems below, including a rather wonderful article from Thinking Faith on a poem by R.S. Thomas, the Welsh poet and nationalist who also happened to be an Anglican priest. On the mystery side, Scottish writer Val McDermid dreams of a lost Josephine Tey mystery, while Leslie Klinger looks back to S.S. Van Dine and the birth of the American detective novel. The great editor Maxwell Perkins said Van Dine was the only writer whose manuscripts he never needed to touch; they were perfect. Perkins did have to edit F. Scott Fitzgerald, Ernest Hemingway, Thomas Wolfe, and Marjorie Kinnan Rawlings, however.

I should have said it was almost a good week for reading mysteries. I was reading a new one which had come recommended and sounded appealing. I soon realized I was reading what clearly was an effort to punch every single politically correct button we have in modern culture. I read about a fourth of the book before I had to stop. It was awful. What it reminded me of was the old Soviet literature, which wasn’t really literature.

The big elephant in the room for the Kavanaugh nomination has been abortion, even if the major news media largely sidestepped it. But other issues loom as well, not only the breakdown of the Senate.
·     Matt Reynolds at Christianity Today has an interesting article on abortion, arguing that abortion isn’t the reason Roe v. Wade is wrong.
·     Conservative writer Rod Dreher has two articles worth reading, one on the end of a trusting society and the second on the terrible snow falling in the temple. What both tell you is that something profound in American life formally ended these past two weeks, and it’s not likely to be restored in this generation.
·     Amy Hall at Stand to Reason looks at the same events, and sees something even darker if we lose the meaning of justice.
·     Samuel James at Letters & Liturgy writes about seeking truth in the age of competing narratives.

Big Tech has been having its troubles, and more may be on the horizon. Tim Berners-Lee, the true founder of the worldwide web (it wasn’t Al Gore), has a new plan to upend the web and end the control by Facebook, Google, and Amazon. We’ll see.

Three politically liberal academics did something decidedly illiberal to make a point. Concerned about what passes for academic research these days, particularly concerned “grievance studies,” three wrote and submitted a series of proposed papers to academic journals. Except the papers were all fake; one was a slight rewrite of a section of Hitler’s Mein Kampf. Seven papers passed peer review, were accepted for publication, and published. It’s causing some soul-searching.

Louise Gallagher, up there in already snowy Calgary, had a lunch date with a homeless man, and it was his treat. Christiana Peterson at Image Journal mourned the lost opportunity for a goodbye. Laura Boggess has been reading Eugene Person and considering imagination.

The turning aside – Nathan Koblintz at Thinking Faithon a poem by R.S. Thomas (Hat Tip: J of India).

I Saw – Tim Good at Photography by Tiwago.

Why is YA Fiction Suddenly So Popular in the Christian Market? Two Theories – Mike Duran at deCompose.

I live on an island of four people – BBC