It Was a Marvelous Year: “The Making of Poetry” by Adam Nicholson 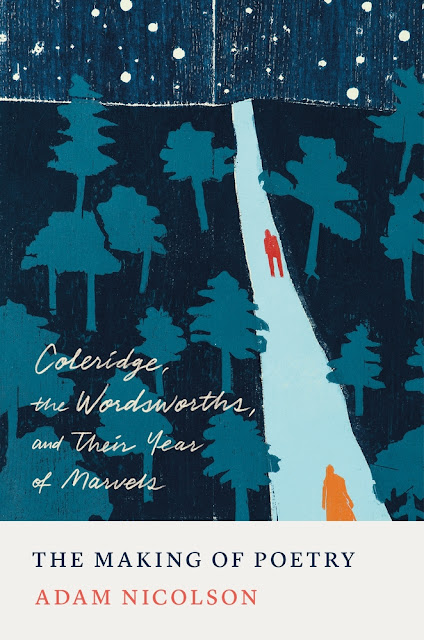 Adam Nicolson has written a story fully worthy of its famous protagonists.

In June 1797, William Wordsworth and his sister Dorothy rented a house for a year near Bristol in western England. After they had arrived at Alfoxton House, Samuel Taylor Coleridge found his way there (via a walking tour) for a visit. The visit would last a year; Coleridge rented a place nearby for himself and his family. The Wordsworths and Coleridge spent an enormous amount of time together, talking, inventing new poetic projects, and taking long walks through the Quantock Hills.

What came out of that year was some of the most significant poetry in the English language: “The Rime of the Ancient Mariner,” “Christabel,” “Kubla Khan,” “Lyrical Ballads,” and “Lines Composed a Few Miles Above Tintern Abbey.” Yet much more happened than the writing of great poems, astounding as they were (and are). The two poets emerged from that period with an understanding of themselves and of poetry as a vital force in life. By the fall of 1798, both Wordsworth and Coleridge would be set upon the courses that made them both famous. 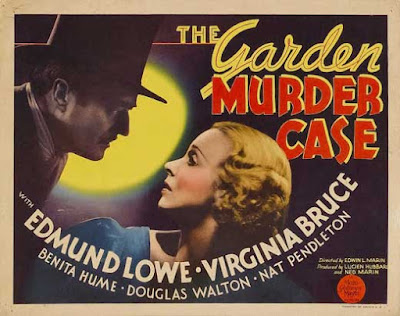 Almost every Philo Vance mystery by S.S. Van Dine includes an in-depth dive into a subject. It may be Egyptian artifacts and hieroglyphics, as in The Scarab Murder Case. It may be Chinese ceramics and pottery. In The Casino Murder Case, the subject was the production of heavy water. Sometimes it’s the scientific study of criminology. The Kennel Murder Case includes an extensive discussion of dog breeding and registration.

The stories also contain a multitude of cursory references to art and music; Vance tosses off references to art, artists, art exhibitions, and symphony and operatic music like many people discuss sports and politics. These references explain why Van Dine included so many footnotes in the stories, footnotes that are real and not invented references. The effect is to depict Philo Vance as a man of broad and deep education, as comfortable puzzling over his translations of Sumerian tablets as he with speculating about the electricity used to produce heavy water. 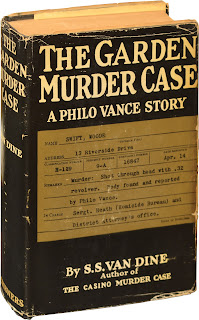 In The Garden Murder Case, first published in 1935, the in-depth subject is horseracing. Floyd Garden lives with his parents and a cousin in the penthouse of a New York City apartment high-rise. The penthouse includes a rooftop garden, and the book’s title is taken from both the family name and the penthouse feature. Garden has organized a horseracing betting party. After receiving an anonymous phone call warning of an impending tragedy, Vance gets himself invited to the party.

The event involves a fairly elaborate set-up of radios, telephones, and betting forms. Vance soon realizes that the anonymous phone caller was correct – so many tensions underlie the party and the house that it’s almost inevitable that something will happen. And it does. The cousin bets everything he has on a horse in one particular race, and then he retires to the rooftop garden to await the results. The bets are placed, the race begins and quickly ends, and then all at the party hear a gunshot. The cousin is dead, shot in the temple in what looks like a suicide. Vance quickly determines that it’s murder. The victim was killed even before he knew the outcome of the race (and his horse did indeed lose).

Over a two-day period, Vance sifts through what’s known and what isn’t known. And then a second murder occurs.

Willard Huntington Wright (1888-1939) was an art critic who had been literary editor of the Los Angeles Times, an editor of The Smart Set, a novelist, an art historian, and art exhibition organizer. A friend of H.L. Mencken and an admirer of the novels of Theodore Dreiser, Wright hated romance and detective fiction with a passion, until he needed money. In 1926, he published the first Philo Vance story, The Benson Murder Case, with Scribners. And he used the pen name “S.S. Van Dine.”

The Garden Murder Case is S.S. Van Dine and Philo Vance at the top of their game. Van Dine liked to play with stories in which justice is only possible when it falls outside the law, and this is certainly one of those. Interestingly enough, this story is the only Philo Vance mystery in which there's a hint of a love interest for the amateur detective. But it is only that, a hint.

The Casino Murder Case by S.S. Van Dine.
Posted by Glynn at 5:00 AM No comments: 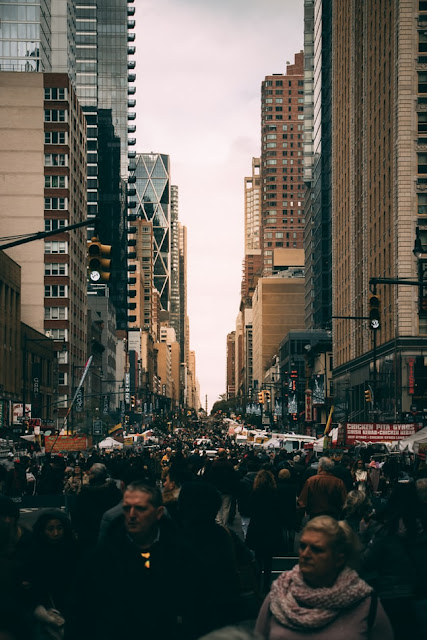 Photograph by Roland Denes via Unsplash. Used with permission.
Posted by Glynn at 5:00 AM No comments:

We All Know a Boo Radley 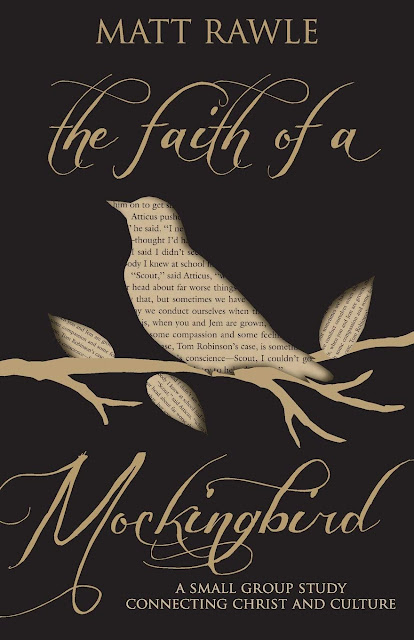 I was all of 21, in my first job after college graduation. I’d been hired as a copy editor on the news desk of the Beaumont (Tex.) Enterprise. Production at the Enterprise was just becoming automated, at least in what we called the “backshop.” Reporters still used typewriters, typing up their copy, handing it to editors (including new ones like me) and hoping we didn’t slaughter their peerless prose when we edited.

Most reporters, like most writers, required editing. I quickly learned who the better reporters were – the ones whose copy didn’t need much editing. Some needed a lot. One rarely if ever needed any – and he was the newspaper’s staff mystery.

I’ll call him Joe. He was in his 50s, and he covered local government. When Joe turned in his stories, he would mumble, almost as if apologizing. I don’t think anyone understood the mumbles. The mystery was how he did his job – he was never seen at a city council or other government meeting, and yet his stories reported exactly what went on. No one knew how Joe did it. Even more mysteriously, no one knew where he lived. He received his mail at the newspaper, and that was his legal address. One staffer followed him in his car one night, and all Joe did was drive around Beaumont for more than an hour until his lost the tail.

To continue reading, please see my post today at Dancing Priest.
Posted by Glynn at 7:00 AM No comments:

Email ThisBlogThis!Share to TwitterShare to FacebookShare to Pinterest
Labels: Boo Radley, Dancing Priest, Harriet Lee, Matt Rawle, The Faith of a Mockingbird, To Kill a Mockingbird 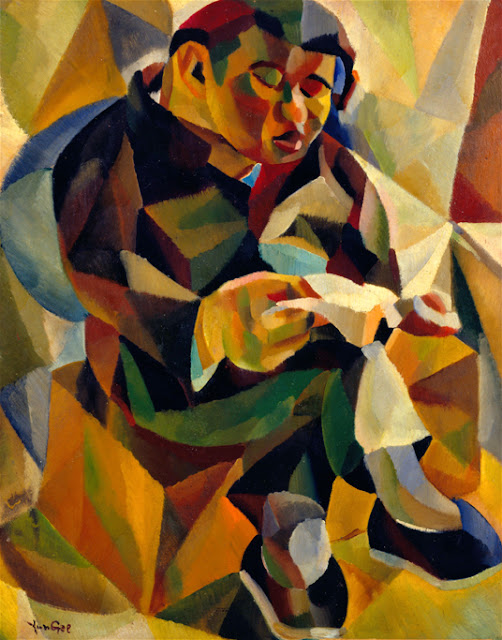 When you meet a fictional character like Ignatius J. Reilly, you may be forgiven for thinking he’s a grotesque version of Shakespeare’s Sir John Falstaff. When I first read A Confederacy of Dunces and met Ignatius, I thought he was like a lot of people I knew growing up in New Orleans. He wasn’t so much grotesque as he was normal. The novel is now 40 years old, and Alexander Larman at The Critic says it’s a book that can change your life.

For several years now, the British Library has been publishing the Crime Classics series, bringing back long-out-of-print mysteries by both well-known and largely forgotten authors. Most of the stories are from Mystery’s Golden Age, the 1920s to the 1940s, with mystery author Martin Edwards serving as general editor. I’ve read about 20 of them, and they’re wonderful. This week at CrimeReads, Edwards was interviewed about the enduring popularity of traditional mysteries.

It’s a common question people ask of novelists: who is this character based on? Or, who inspired your hero / your villain? In my own case, the most likely answer is that characters come from my imagination, or are a composite, or (the really true answer) I don’t know. I can think of only one character in five novels that drew inspiration from someone I actually knew, and even that person wouldn’t recognize it. Richard Russo at Harper’s Magazine has a different answer, and he asks the question, when does imagination become appropriation?

The tendency to fall for conspiracy theories spans the political and social spectrums. The reality is that we tend to fall for them, no matter how smart and wise we think we are. Jordan Standridge at The Cripplegate takes a look at Jesus’s resurrection and what he calls the dumbest conspiracy theory in history.

The danger of safetyism – Matthew Crawford at UnHerd.

When Zoom Becomes a Prison – James Jeffrey at The American Conservative.

The Code and the Key – David Mamet at National Review.

The Book of Repose: Horizontal and Vertical Time in 'Laurus' and in Lockdown – Nathan Beacom at Plough Books.

Bodying Forth the Classics: A Manifesto – Jessica Hooten Wilson at Church Life Journal.

Back to the Sources: Notes on Chesterton the Historian – Jane Lewis at Mere Orthodoxy.

Maigret’s Room – John Lancaster at The London Review of Books.

Every Morning He Hallowed Himself – James Matthew Wilson at The North American Anglican.

Ode to Spring – Adam Sedia at The Chained Muse.

In Our Memory Lock’d: Memorial Day and the Need to Remember – Jon Schaff at Front Porch Republic.

5 Truths to Remember While the Police Station Burns – Jesse Johnson at The Cripplegate.

Leaping the Fence: On English gardens and style – Nicola Shulman at New Criterion.

How did he hear 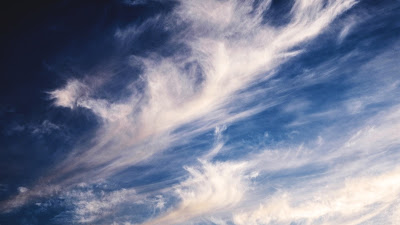 How did he hear the voice,
this shepherd, with flocks,
this leader, with family?
A dream, on the wind,
a whisper, a shout?

The words: go; you will be
great, a great nation;
you will be a great blessing;
all families will be blessed
through you.

And what did he do,
how did he respond,
to this shout, this whisper,
this dream, this wind?
He went.

Photograph by Mila Young via Unsplash. Used with permission.
Posted by Glynn at 5:00 AM No comments: 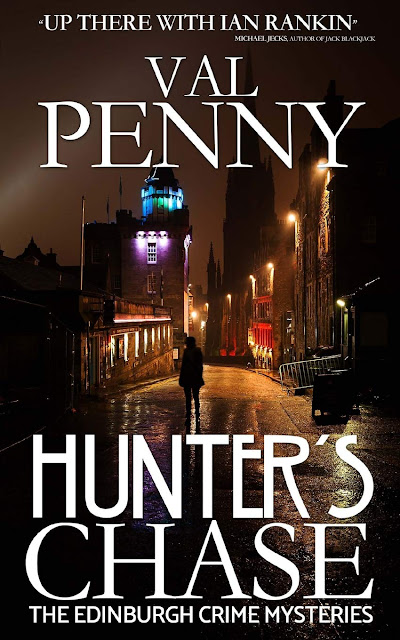 A thief breaks into the Edinburgh home of Scotland’s minister of Justice. He’s helping himself to various valuable, including a wad of cash in a desk, when the minister arrives home early and surprises him. The minister is up in years, but he gives chase. The thief reaches a nearby golf course when he stumbles and breaks his ankle. What he’s stumbled over, or into, is the dead body of a woman.

Detective Inspector Hunter Wilson arrives to take charge of the case, and he’s just thrilled when the burglary victim turns out to be his former boss in the police force. The two never got along when they had to work together, and they likely won’t be getting along still. The body, a red-haired woman in her 40s, shows signs of old physical abuse. What complicates the case even further is the burglary suspect, who stoutly maintains that the bag of cocaine in the wad of cash is not his. And if it’s not his, then it must belong to Scotland’s minister of Justice.

Hunter’s Chase is the first of five novels in the Edinburgh Crime Mystery series by Val Penny. It introduces the reader to Hunter Wilson and his team of detectives, including the brand-new team member, the son of the minister of Justice. It’s a big story, with a large number of characters, generally organized into police, their families, and the main players and families of two chief villains.

As the story progresses, all of these stories begin to intermingle in an engrossing tale of drugs, petty crime, murders, family passions, and old secrets. Wilson, divorced, will come to understand that his own family is enmeshed as well.

Hunter’s Chase is a finely wrought story, a big story full of personal drama, well-developed characters, and a very past pace that that keeps the reader’s attention riveted.
Posted by Glynn at 5:00 AM No comments: