“The Auschwitz Detective” by Jonathan Dunsky 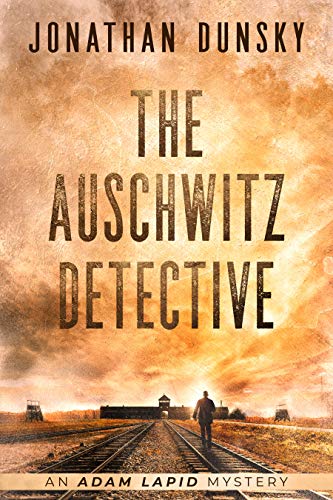 We know Adam Lipid as the fictional private detective in 1950s Israel. We know he has a history: a police detective in pre-war Hungary, shipped with his entire family to Auschwitz in 1944, the only survivor of that family, and an entrepreneurial assassin in post-war Europe, targeting former Nazis and death camp officials. Almost all of what we know of his time in Auschwitz is that his wife and two young daughters were gassed and sent to the crematorium. We suspect but don’t know that the same happened to his sisters and his mother. His father had died before the war.

In The Auschwitz Detective by Jonathan Dunsky, we find out what happened to Adam in Auschwitz. He was one of hundreds of thousands of Hungarian Jews sent to Auschwitz in 1944. He was one of the few who survived. His survival is even more surprising given that he was a former police officer; the camps were inhabited by a wide array of criminals in addition to ordinary citizens. had been there two months, forced to work as a slave laborer, when a particularly brutal prisoner overseer, himself a camp inmate, gives Adam three days to find the killer of one of his “servants.”

If Adam fails to find the killer, Adam will die. Ordinary justice didn’t exist inside the camp, where the overseers were Jewish or non-Jewish criminals, German SS guards, or even the SS doctors, who seemed to enjoy picking out those destined to die as physically unfit. The murder victim, a 15-year-old boy, was found with two pieces of bread hidden in his shirt, which tells Adam this was no murder by an ordinary prisoner. An ordinary prisoner would have taken the bread. 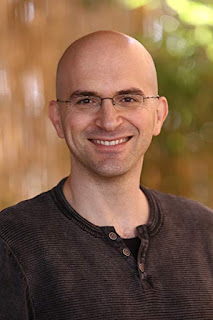 Adam’s assignment takes him across the breadth of the camp’s operations. He’s assigned to take the suitcases left on the platform by incoming trainloads of Jews and bring them to the warehouses. Except there aren’t enough warehouses. He works inside the warehouses, where the victim had worked, sorting through clothes and belongings. He talks with inmate guards and other camp inmates. He can do this because the name of the overseer strikes fear in everyone. And through it all, he tries to stay alive, and keep a good friend alive as well.

What he experiences and uncovers is as dark as the skies above the crematoria.

Dunsky is best known for his Adam Lapid mystery stories, with six published: Ten Years Gone, The Dead Sister, The Auschwitz Violinist, A Debt of Death, A Deadly Act, and now The Auschwitz Detective. He’s also published The Favor: A Tale of Friendship and Murder; Family Ties; Tommy’s Touch: A Fantasy Love Story; the short story “The Unlucky Woman,” and other works. He was born in Israel, served four years in the Israeli Army, lived in Europe for several years, and currently lives in Israel with his family. He has worked in various high-tech firms and operated his own search optimization business.

The Auschwitz Detective is a departure for Dunsky and his detective. It is as much a detailed snapshot of how Auschwitz operated as it is a murder mystery. It’s filled with historical detail, reflecting what was likely an enormous amount of research, but not to the point where the research overwhelms the story.

My review of Ten Years Gone by Jonathan Dunsky.

My review of The Unlucky Woman by Jonathan Dunsky.

My review of The Dead Sister by Jonathan Dunsky.

My review of The Auschwitz Violinist by Jonathan Dunsky.

My review of A Debt of Death by Jonathan Dunsky.

My review of A Deadly Act by Jonathan Dunsky.

My review of Grandma Rachel’s Ghosts by Jonathan Dunsky.

Thanks I think Glynn. I am a Dunsky fan and now you have just told me I need to buy one more. Too bad for me. :)