"A Deadly Act" by Jonathan Dunsky 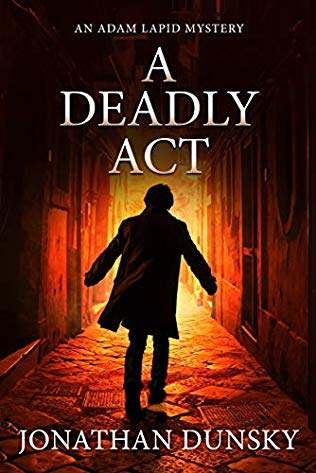 It’s 1951 Tel Aviv. Israel’s War for Independence is four years past, and the Holocaust of World War II a few years older, but both events loom large in the new country’s everyday life. They also loom large in the life of private investigator Adam Lapid.

Lapid had been a police detective in Budapest until 1944, when the German army moved in and took over the country. Lapid, his wife, his daughters, and more than 400,000 other Hungarian Jews are loaded onto cattle cars and sent to Auschwitz. His wife and daughters died on the day of arrival. Lapid is one of the few who survived. Before emigrating to Israel, he spends two years traveling around Germany, murdering Nazis who believed they had successfully evaded war crimes.

He arrives in Israel just in time for the War for Independence. He joins the Israeli army and becomes a national hero for his almost suicide-like mission that saved his company. He also nearly dies but is carried to safety and army doctors by his best friend. After he recovers, and after the war is over, Lapid becomes a private investigator based in Tel Aviv. Tel Aviv of the early 1950s is a noir kind of city, with nearly every citizen a minor criminal for evading rationing. And some citizens do far worse – smuggling, fraud, corruption, and murder.

Lapid is hired by a stage actress who was once famed for her performances but now almost a cripple after receiving serious injuries in a hit-and-run accident. She wants him to prove that her husband, a stage actor and director, murdered an actress five years before. She believes he’s the murderer in the unsolved crime because she lied to give him an alibi. The cold case looks almost unsolvable, and the police aren’t exactly happy with Lapid for attempting to do what they couldn’t. But he finds a loose thread here, a slender lead there, and soon the private eye is unraveling a carefully orchestrated series of crimes. He’s also putting his own life at risk.

A Deadly Act is the fifth Adam Lapid mystery novel by Israeli author Jonathan Dunsky. It’s a solid, often mesmerizing evocation of a place and time almost 70 years in the past. It fits well in the tradition of noir mysteries, where almost every character carries a past they’d rather forget and you never know when a gun will be fired or a knife thrown. And it explores the theater in Israel’s early modern history.

The first four Adam Lapid mysteries are Ten Years Gone; The Dead Sister; The Auschwitz Violinist, and A Debt of Death. He’s also published The Favor: A Tale of Friendship and Murder; Grandma Rachel’s Ghosts; Family Ties; Tommy’s Touch: A Fantasy Love Story; the short story “The Unlucky Woman,”and other works. He was born in Israel, served four years in the Israeli Army, lived in Europe for several years, and currently lives in Israel with his family. He has worked in various high-tech firms and operated his own search optimization business.

Like the good noir novel that it is, A Deadly Act throws one twist and turn after another. It’s a story where the facts keep changing, and no one is who they appear to be.

My review of Ten Years Gone by Jonathan Dunsky.

My review of The Unlucky Woman by Jonathan Dunsky.

My review of The Dead Sister by Jonathan Dunsky.

My review of The Auschwitz Violinist by Jonathan Dunsky.

My review of A Debt of Death by Jonathan Dunsky.
Posted by Glynn at 5:00 AM

Well...thanks for letting me know I now have another book to buy. :) I loved his other novels. I also read The Payback Girl. It, too, was a good one. Right now this says on Amazon it is only available on Kindle (which I don't have). Do you know if it going to come out in book form?

On his Facebook page, Dunsky said the paper will likely be coming in March. The Kindle version as published first, and provided a version for final proofreading. It takes about two weeks, he says, for the physical proof version to reach Israel from the US. So the expectation is sometime in March. (This tracks closely with my own experience -- about a two-week lag.)