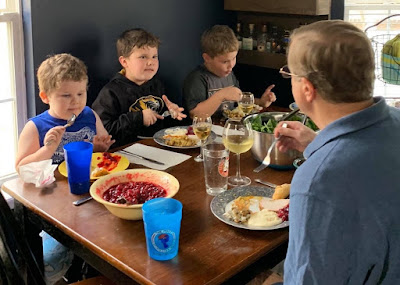 In March, I will mark an important anniversary – my tenth year as a grandfather. Little did I know how much I would enjoy what I would come to realize was the best job in the world.

I knew neither of my grandfathers. My mother’s father died when she was 11; the state of medicine at the time had difficulties diagnosing the difference between a stomach upset and appendicitis. My father’s father died when I was nine months old; I relied on my grandmother to tell me stories about him. I had no doubts about how spoiled I would have been had he lived longer.

It was a different world, and at the time of his death I was the only son of the only son. Many times, both my grandmother and father told me the story of how, dying at home, he held on until my family could arrive. He was mostly delirious, and he kept asking for the baby. My father put me on the bed with him, and he smiled. It was enough. A few hours later, he was gone.

Photograph by Stephanie Young.
Posted by Glynn at 5:00 AM

Grandfather for 13 years. Nothing like it. As they say, "If I had known it was this much fun I would have had my grandchildren first."

Great idea! And there is nothing like being a grandfather.