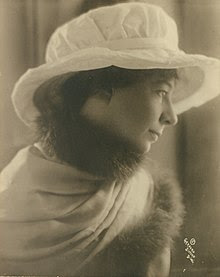 My town of St. Louis claims Sara Teasdale as one of its own, but you wouldn’t know it from any sign, memorial, plaque or other designation. The city does not discriminate; T.S. Eliot is treated the same way, although he does have a plaque on the sidewalk in front of where his house once stood.

Teasdale was born in St. Louis in 1884. She lived in a house on Lindell Boulevard, today the northern boundary of Forest Park. In 1902, her family moved to Kingsbury Place, a few blocks north and what in St Louis was and is known as a “private street.” The city’s Central West End is filled with these private streets, built by developers for the wealthy. Homeowners on these streets today continue to be responsible for street repair, maintenance, and snow removal, and the homes and the streets have largely survived the vicissitudes of urban decay.

The Novel That Wasn’t Meant to be Written 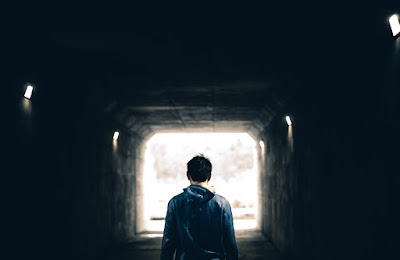 For roughly 14 months, from September 2005 to November 2006, a story idea that had been in my head for four years began to pour out on the computer screen. Once it came, it gushed, some 250,000 words of the roughest sort of rough draft. It would be spliced, diced, rewritten, divided into three parts, added to, and subtracted from, eventually published as Dancing Priest (2011), A Light Shining (2012), and Dancing King (2017), the three novels in the Dancing Priest series.

In November 2006, I stopped, and rested. Two months later, a story from my small suburban town of Kirkwood in metropolitan St. Louis became international headlines. A boy kidnapped in nearby Franklin County had been found by police in Kirkwood. With him was found a boy kidnapped in 2002.

Photograph by Warren Wong via Unsplash. Used with permission.

"A Monster Calls" by Patrick Ness 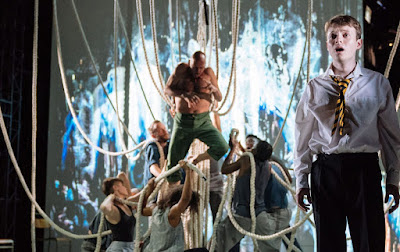 Conor O’Malley, all of 13, is having nightmares. The yew tree at the back of their house becomes a monster. And the monster comes looking for him.

Conor lives with his divorced mom; his father has remarried and moved to America. Conor is increasingly taking care of himself; he makes his own meals, gets himself ready for school, and cleans up around the house, maintaining as best he can a degree of family normality. It doesn’t take long to understand why: Conor’s mother has cancer. 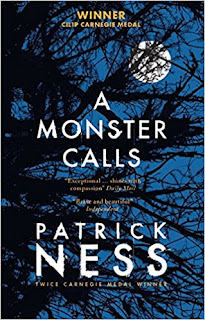 At school, Conor had always been an overachiever, first to raise his hand in class to answer a question, always do well in his subjects. But his schoolmates and teachers learned about his mother, and they began to treat Conor with kid gloves. The more they do, the more he withdraws. Only the bullies pay attention to him now, except when the monster shows up.

The monster wants to tell Conor three stories. And he wants Conor to tell him a fourth story. The sicker his mother becomes, the more frequently the monster is showing up.

There is also the specter of his grandmother, who tightly manages her own world as much as Conor is trying to manage his. The two do not get along well.

A Monster Calls by Patrick Ness is based on an idea by the late children’s and young adult writer Siobhan Dowd (1960-2007), who died from a severe case of breast cancer. Ness, himself a children’s and young adult author, wrote the story in honor of Dowd. The book was written into a screenplay for the movie of the same name, released in 2016, and was also a play produced at the Old Vic Theatre in London this summer.

The movie starred Felicity Jones (Conor’s mother), Sigourney Weaver (the grandmother), Lewis MacDougal (Conor), and Liam Neeson as the voice of the monster. It received high critical ratings but did poorly at the box office in the U.S.

Ness is the author of several works of fiction for both young adults and adults, including The Crane Wife, The Knife of Never Letting Go, The Ask and the Answer, Monsters of Men, and The Crash of Hennington. Born in Virginia, he received a degree in English Literature from the University of Southern California. He lives in London.

A Monster Calls is a moving, gripping story of a young buy trying to deny, deal with, and understand the collapse of the only world he knows.


Top photograph: A scene from A Monster Calls at the Old Vic Theatre.
Posted by Glynn at 5:00 AM No comments: 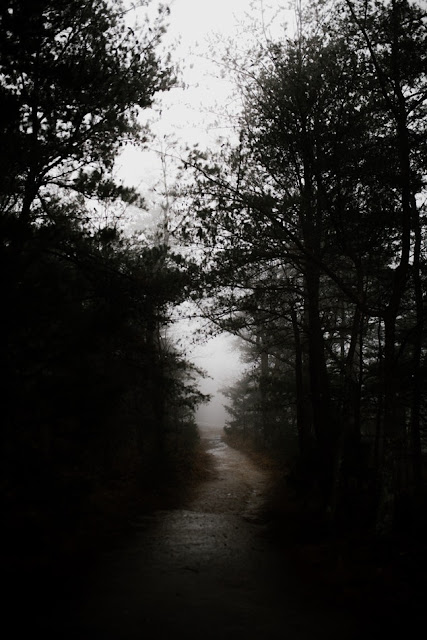 The two paths present a choice,
not a choice of high road
and low road, not the kind
of journey to the same place,
not a road taken or not taken,
but a choice more stark,
more obvious: a path of light
or a path of darkness.
We can’t choice darkness
believing our own light
is sufficient, for our own light
will be overcome (easily);
the darkness is too deep,
too thick, too overwhelming
to be overcome by our own light.
A different light is required, needed,
demanded to see clearly,
to understand deeply, to know
with certainty. The choice is
a double one: to choose the path
of light and to choose the light
ordained. The path is a single one:
not many paths, or even two,
but only one,
one to choose
and one to reject.

Photograph by Andrew Neel via Unsplash. Used with permission.
Posted by Glynn at 5:00 AM No comments:

The Teacher in the Turban: The Year I Discovered the Realists 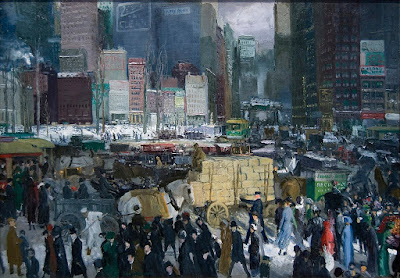 My junior year in high school (1967-68) was, perhaps like all years, a crazy time to be 16 years old. Those nine months included starvation in the Biafran region of Nigeria; the deaths of three astronauts in a test launch at Cape Kennedy; the Tet Offensive in Vietnam; and the assassination of Martin Luther King, Jr. We went to see movies like “The Graduate,” “Bonnie and Clyde,” and “In the Heat of the Night,” and the Beatles were upended their own music and rock music in general with “Sgt. Pepper’s Lonely Hearts Club Band.”

This was the high school year for American history and American literature. American history included a mandatory six-week section on communism; the required text was Masters of Deceit by J. Edgar Hoover. My history teacher was a maverick; rather than read what others said communism was, somehow she got grudging approval for my class to read a large chunk of Das Kapital by Karl Marx. It was actually a brilliant move; we learned that, if Marx was any indication, communism was flat-out boring. Who wanted that?

It was junior English that left the most lasting mark on me. Our teacher, Mrs. Prince, was new to the school, an all-boys public high school. She was tall and rather broad-shouldered and wore her hair in a beehive. And she was a presence. She had a loud voice and talked as much with her hands and arms as she did with her mouth. She wore bright colors, including the occasional turban.

The first day of class, she announced that the greatest work in American literature was Valley of the Dolls by Jacqueline Susann, published the year before. Now, we may have been 16-year-old boys, but even we knew that was something of a ridiculous statement. 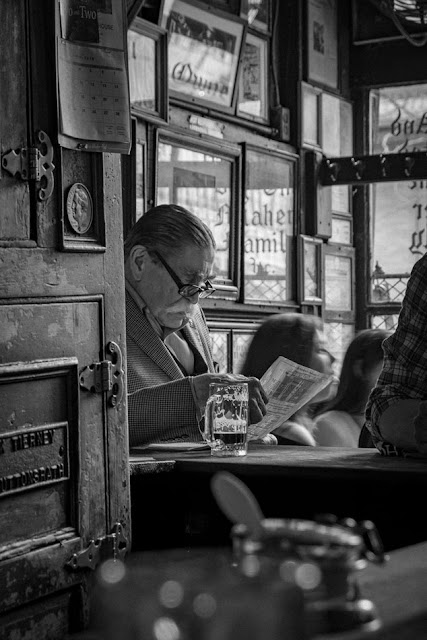 
Photograph by Kyle Wagner via Unsplash. Used with permission.
Posted by Glynn at 5:00 AM 2 comments: 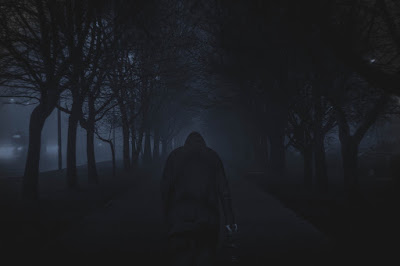 The darkness came
at the ninth hour, when
the day should have been filled
with light. The darkness rolled
across the landscape, the clouds
heaving in agony, rocks cracking,
the wind tearing at men’s souls,
hearts, minds. The darkness came
and tore the curtain, the veil,
in one motion ripping the authority,
shredding, a sound like a scream.

The darkness rolled and thickened
like fog, its initial mystery transformed
into a terror, a wrath poured out
upon a substitution. The darkness poured
through hearts and minds and souls
and spirits, flowing in love,
a terrible, terrifying love.

Photograph by Elti Meschau via Unsplash. Used with permission.
Posted by Glynn at 5:00 AM No comments: