The cover photo for my "orphan" book 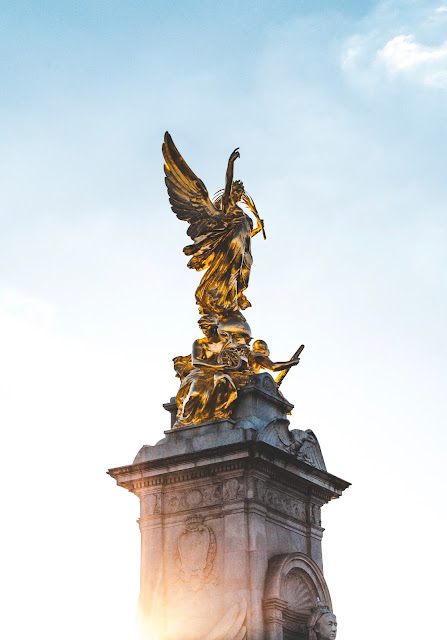 I've called it my my orphan book - the one I struggled to write because I wanted to get to the one after it. This one was in the way, and it was too fragmented, and too disconnected, with too much needing to be done.

But I couldn't get to the one I wanted to write until this one was written. And then something happened in the struggle: the orphan book became my personal favorite. New characters emerged, new story lines developed, and new scenes erupted right on my computer screen.

And now it's moving through the editorial production process, shepherded by Mark Sutherland at Dunrobin Publishing. Aboce is the cover photo we're working on for novel #3, Dancing King. It was taken by Thomas Kelley, via Unsplash.
Posted by Glynn at 10:00 AM 2 comments:

Poe, Rilke, and Our Black Cat 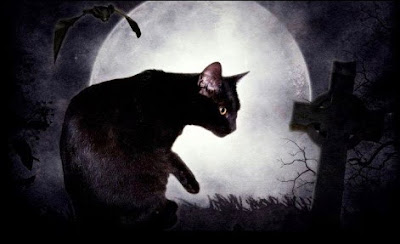 Think Halloween, and what comes to mind (after tick-or-treat candy) are the big 3 icons of witches, pumpkins, and black cats. Mummies, skeletons, and zombies are more Johnny-come-latelys in the Halloween extravaganza. These days, witches have gone mainstream respectable, and Linus and Charlie Brown own the Great Pumpkin, and so the black cat is left to shoulder Halloween largely alone.

My family had a black cat, once. Actually, the cat had us. One day in the middle of winter the cat showed up in the neighborhood. She had a collar but no tags, and she looked healthy. The neighborhood children fed her potato chips and milk, guaranteeing it would hang around. My wife warned the children that, if they kept feeding it, the cat would never leave (not the best argument to make to a child).

Two on St. Francis: Prayer and the Creatures 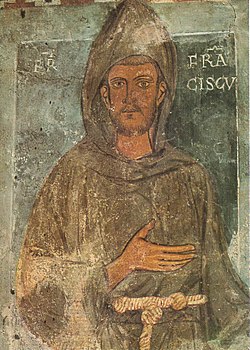 We live in an age of the 24-hour news cycle, and most of that news always seems to be bad. Earthquakes, hurricanes, shootings, crime, terrorist attacks – it’s all bad news. Even on a more personal level – a relationship gone bad or ended, frustration with a job, unhappiness with one’s church or form of church worship – our lives seemed filled with the negative.

It’s not surprising that we look to different times, different eras, for understanding and encouragement. Returning to the example of the early church and often the medieval church is a recurrent theme in Christian history. And one figure in church history who offers radical simplicity, encouragement, and understanding is St. Francis of Assisi (1181 or 1182 – 1226). Two recent books demonstrate the enduring appeal of St. Francis and how his life, works, and words still apply today. 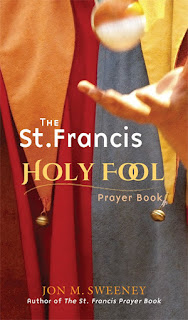 Just like St. Francis, you can be a fool, too, suggests Jon Sweeney in The St. Francis Holy Fool Prayer Book. And what he means by “fool” isn’t necessarily the contemporary definition. The “holy fool” is the one who tries to live our his or her life according to the Beatitudes, Sweeney says. Jesus was such a fool; so was St. Paul. And so was St. Francis.

Sweeney, an independent scholar and writer of some 25 books (many of them about St. Francis), offers a prayerful approach to the saint in this latest work. He provides an overview of how fools might pray, and then a guide for prayer – “at least for a week.” The prayers are organized into the same sequence for each day: preparation, the Word of God, silence, song of my soul, a reading from the prophets, a New Testament reading, silence, an early Franciscan saying, and finally a spiritual practice. The sequence stands as a spiritual practice itself, and Sweeney provides a theme for each day as well.

It’s a simple approach, but it’s backed by extensive St. Francis and Biblical scholarship. Sweeney knows his saint, and that knowledge permeates the book. I love the simplicity and the routine he provides in this guide, and what I mean by routine isn’t “routine” – trying preaching to the birds as a spiritual practice. 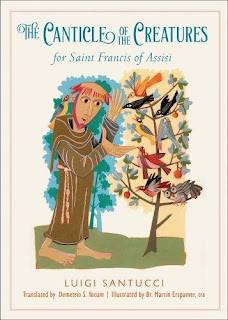 A second recent book on St. Francis is actually a reprinting with wonderful new illustrations of The Canticle of the Creatures for Saint Francis of Assisi by Luigi Santucci (1918-1999). Santucci, an Italian writer, poet, novelist, and comedian, first published this small book in 1981. In fact, he was one of the most important Italian writers of the 20th century, and had been an active participant in the Resistance against the Fascists during World War II. His list of writings – poetry, fiction, scripts, and works of faith – is extensive.

The Canticle of the Creatures allows the birds and animals known to St. Francis to speak for themselves – about their lives, the saint, and what they learned from him. In short, mostly one- or two-page entries, we hear from the nightingale, the swallows, the falcon, the doves, another birds; and from the fish, the rabbit, the lamb, the cicada, the bees, and the wolf (among others). All of the creatures are drawn from what is known and what’s been written about St. Francis, primarily by himself and his contemporaries.

It’s a poignant, beautiful little volume (the illustrator is Brother Martin Espramer, OSB, and the translator is Demetrio Yocum, who works at Notre Dame in research and translation). Some of the entries are like short sermons, a reversal of sorts of St. Francis preaching to the animals.

Both books are useful for contemplation, prayer, and spiritual practice – and the idea of carrying a spiritual practice into the world. With the saturation of bad news on a daily and hourly basis, perhaps there’s never been a better time to be a holy fool.

Top Illustration: the oldest surviving picture of St. Francis, painted between 1228 and 1229 at the Benedictine Abbey of Subiaco.
Posted by Glynn at 5:00 AM 1 comment:

I met a man 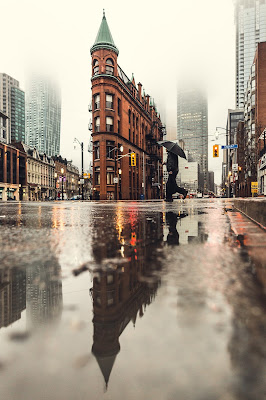 Photograph by Matthew Henry via Unsplash. Used with permission.
Posted by Glynn at 5:00 AM No comments: