“The Chase of the Golden Plate” by Jacques Futrelle 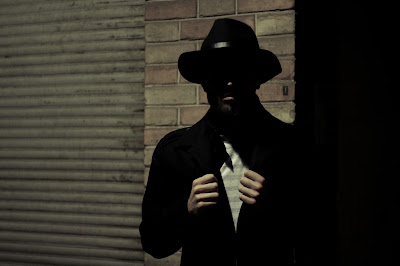 It begins at a masquerade ball, where a young woman in a Western outfit and sombrero meets up with a man dressed as a burglar. Clearly the meeting is pre-arranged. And just as clearly, it seems the pair is all about robbing the host and the guests.


They flee the party in a stolen car, pursued by police who fire shots at the pair. But they make good their escape. 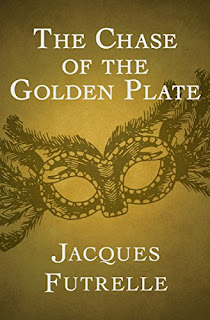 
The young woman discovers her companion has not only been shot, but he has also stolen his host’s golden serving plates. She dresses his wound and walks away, taking the plate with her.


In The Chase of the Golden Plate, first published in 1906 by American journalist and mystery writer Jacques Futrelle (1875-1912), a love story becomes a crime story becomes a mystery story, and it must all be unraveled by Augustus S.F.X. Van Dusen, known by his nickname “The Thinking Machine.” Futrelle write a number of Van Dusen mystery tales, of which The Chase of the Golden Plate was the first novel.


“The Thinking Machine” ruthlessly applies logic to any and all cases, but he almost appears as an afterthought in this work. For two thirds of the story, it is a reporter who looks like the most likely amateur detective, as he uncovers information the investigating police ignore or miss. But then the reporter consults with the famous Van Dusen, who essentially takes over the case from both the reporter and the police. What he helps both the reporter and the police see is that appearances in this case are entirely deceiving, and even deceiving to the principals themselves.


While the character of Van Dusen was clearly influenced by Sherlock Holmes, what is surprising about this novel published more than a century ago is its almost contemporary feel. This likely is a result of Futrelle’s journalistic background and writing style, which is relatively fact-driven and straightforward.


Futrelle died at the relatively young age of 37. He and his wife were returning from a trip to Europe about the Titanic. He refused to get into a lifeboat but had to force his wife to do so. The last she saw of her husband was him speaking to John Jacob Astor, who also didn’t survive the ship’s sinking. Futrelle’s body was never found.


The Van Dusen stories were popular in their day, a reminder that mystery stories were popular long before the Golden Age of mystery in the 1920s and 1930s. The Chase of the Golden Plate isn’t a perfect mystery; the introduction of Van Dusen seems too abrupt and almost as if Futrelle had written himself into a box and had to invent a new character to get out of it. But it still well worth reading, not only as a work of its period but as an important chapter in the history of American mystery writing.


Photograph by Sergiu Nista via Unsplash. Used with permission.
Posted by Glynn at 5:00 AM