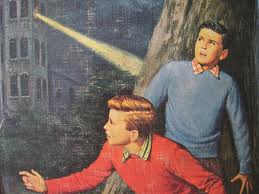 I was an early reader. I can’t say exactly when it was that I started reading, but I know I was six when I bicycled up to the dime store and bought Trixie Belden and the Secret of the Mansion, a hardback published by Whitman Publishing, for 59 cents. (Imagine a new book for 59 cents.) (Imagine allowing a six-year-old to bicycle to a shopping center by himself.)

I liked Trixie Belden, but nowhere near as much as I liked the Hardy Boys. The Hardy Boys books were first published in the 1930s; I read the familiar blue-binding reprints that began to be issued in the late 1950s and early 1960s.

Joe and Frank Hardy were like my brothers. I helped them find the tower treasure, solve the great airport mystery, and discover what that Chinese junk was really all about. I rode in the back of their roadster (Nancy Drew drove a coupe). I got into serious trouble with them. I stood next to them in their father’s library as he sternly reprimanded the three of us. In all, I shared more than 40 mysteries with Joe and Frank. We had some great (and some scary) times together.

I wanted to be a real sleuth, which sounded so much younger and classier than “private detective.” Failing that, I would be a mystery writer. And, in fact, I started writing one when I was 10. My father owned a printing business, and one day he brought home a paperbound blank book for me to write to my heart’s content. I don’t remember all of what I wrote, but it was a mystery with a bunch of kids who find a secret passage behind a grandfather clock.

The Hardy Boys were what adventure was all about – excitement, danger, mystery, good guys and bad guys, teenagers outwitting all the adults and becoming heroes, and no mushy stuff.

I eventually outgrew the Hardy Boys, my mother sold my entire collection at a garage sale, and I went on to other things.

Life turned out to be a lot less like the Hardy Boys and a lot more about, well, day-to-day living. Most of us live lives that aren’t filled with danger, excitement, mystery and heroes. My life looks pretty tame compared to the Hardy Boys.

But every once in a while, I sneak down to the basement, and find the Hardy Boys books that I’ve picked up at garage sales, used book stores and book fairs, and discover that the adventure is still there, and Joe, Frank and I are tearing along the Shore Road in that roadster, on the prowl for the bad guys.


This post is submitted for the One Word Blog Carnival hosted by Peter Pollock. To see more posts on “adventure,” please visit the site. The links will be live at about 10 p.m. Central time tonight.

Illustration: Cover art for the “The Hardy Boys and the Tower Treasure” by Franklin Dixon. I'm really in the picture, too, just off to Joe's left, next to the tree.
Posted by Glynn at 8:00 PM

I LOVED the Hardy Boys.

But at some point, I was reading them, and starting taking note that those boys like girls.

Shortly, I put down the Hardy boy books and started my adventure of chasing down adventures of my own... most of which revolved around girls.

I'm all grown up now.

I only chase one girl these days. :)

What a shame your mother sold that collection! I got such a visual image of you sneaking away for a basement read. Wonderful post.

I had a lot of reading adventures, including John Le Carre's "Spy Who Came In From the Cold" when I was in sixth grade, Hemingway's reportage, and probably every book Scholastic ever sold through the schools.

I used to love Trixie Belden. I remember reading one of those stories called "The Mystery of the Antique Doll," pronouncing the word "ant-i-cue" through the entire thing. LOL

Oooh Oooh! Trixie and the boys! My favs.

Thanks for the adventure.

My 7-year old son is an avid Hardy Boys reader. I think he eats the books, actually. The other night we were eating dinner and we heard a "thunk" in the basement. I pushed the dog down the stairs first and followed with my pepper spray. I had told my son to wait at the table but when I turned around he was standing behind me with a sword and a dining room chair.

He said, "Mamma, I ain't gonna be taken off-guard like those Hardy Boys sometimes get. I am ready for whatever is down there." I nearly peed my pants from laughter. And the noise was our clumsy 3-legged barn cat, trying to peek in the window.

Hardy Boys to the rescue!

You would not believe how this resonates at my house, Glynn! My girls are BIG time Nancy Drew fans. They just entered a cake decorating contest. Our kitchen-dining room was covered with frosting colors you wouldn't think possible, all so they could illustrate all 23 existing Nancy Drew video games. The Her Interactive website allows them to compose mysteries as well, so you can be sure there's plenty of reading going on, whether our books come from garage sales, library, or the occasional "must have/can't find" bought new.

(You gave me a smile. I hope I offered one in return, assuring you that the teen detectives are very much alive and well.)

As a child I enjoyed immersing myself in adventures in a book. Like you I discovered that real life in general is one foot in front of the other. It often is also that way in our Christian life. Not always do we enjoy the mountain top experiences but adventures are often mundane and not so magnificent in our daily walk. Still any adventure with God is spectacular.

I never really read the Hardy Boys.
I read Nancy Drew when I stayed at my Grandma's because they were pretty much the only kids books she had and I LOVED the Famous Five series by Enid Blyton.

We vacationed in cold and desolate places and I'm sure I wouldn't have enjoyed them nearly so much if it hadn't been for Enid Blyton's descriptions of the fun that could be had in such places.

My biggest adventure these days is checking my email.....

There's something wrong with this picture....

I used to read the Hardy Boys and when I had two girls of my own we bought the Nancy Drew mysteries for them. My favorite was Chip Hilton because i was into sports and he was also. I even read them while in class (and the teacher never knew). Yeah right. Thanks for the drive down memory lane Glynn. Oh, I am with Maureen on the getting rid of the books. Yikes!!

Glynn - you are bringing me back to my childhood. I remember at 11 years old one summer reading through every Hardy Boys book I could get my hands on. I couldn't get enough. Then, yes, I too wanted to start my own mystery sleuth PI club. I forget the details now, but I'm sure I spent hours and hours fantasizing about it.

Then, like you, I also went down to my father's typewriter and plunked out not one, but TWO mystery stories. I wish I had saved them, but like the HArdy Boys books, they ended up in the trash or somewhere else.

Look at us. Still having adventures in writing.

That ending just makes me want to cry. Remembering when the world was younger...

I have read some of the old Hardy Boys books my uncle had and I really enjoyed them. Nothing like a good adventure read!

I liked to read the Little House books. But I watched the Hardy Boys on television. Shawn Cassidy and Parker Stevenson. Need I say more?

My son is into spies and mysteries. He's not old enough to read those yet, but I can't wait for the day he's introduced to the Harcy Boys.

And I'm with Peter. If it's not email that's my biggest adventure, it's figuring out what's for dinner!

I LOVED Nancy Drew! I used to go to the library in my neighborhood a few times a week to return and take out books. It's not that I was cheap: we didn't have a bookstore nearby, while the library was.

Adventure is just a good story away. Thanks for the walk down memory lane.

I was a Nancy Drew fan. And rode my bike to the store by myself, something that I would NEVER let my kids do. Times change, huh?

New adventures await us, just not like what we read about in those adventure books. Ha.

Read 'em all, too, Glynn, in Mrs. Emery's 4th grade class when she wasn't looking. I haven't returned to read them because I'm afraid they'll seem silly or young to me. As far as I'm concerned, those guys are still older than me. Ha!

Ah, but in the day to day there are glorious moments in His presence and no mystery novel can compare.

since i was not a child reader, and my parents were not readers until later in life.
i was introduced to mystery via peter. he bought me the complete sherlock holmes. and i was wild about the made for tv series from the 1980's that stared jeremy brett as holmes and david burke as watson.

of course the new series that was shown at the end of last year staring benedict cumberbatch as holmes and martin freeman as watson is quite a kick. hoping to see the next three in the fall.

A lovely trip down memory lane, Glynn. I used to climb the apple tree in my backyard and read Nancy Drew for hours. I'd even pack snacks to bring up there!
And I road my bike 2 miles one way by myself to buy Bublicious Gum at The Country Store. Now I have 10 heart attacks when I let my kids ride their bikes around the neighborhood block.