A Month with Keats: Keats and Wentworth House 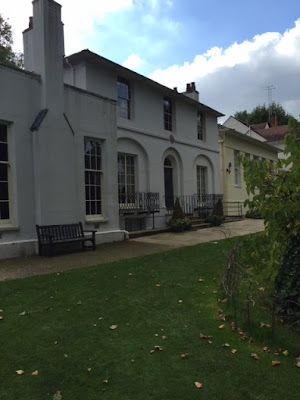 Anita Miller, our guide on the Keats Walk, leads us from Hampstead Heath and back toward the town of Hampstead. We pass a small circus, with circus music and clowns smoking cigarettes behind the big tent. We make our way through the crowds to a narrow street called Keats Grove. About four houses down, we come upon Wentworth House.

The house was built in 1816, not long before John Keats first encountered it. As our guide and the docent at the house tell us, it was originally what we Americans call a duplex, with a wall dividing the house into two separate residences. The left side was occupied by Charles Armitage Brown, Keats’ good friend and hiking companion, and Keats himself after his brother Tom died in December 1818. On the right was the Dilke family, who moved out and replaced by the Brawne family, including the eldest daughter, Frances, or Fanny, who became Keats’ great love and fiancée.

A meeting room on the left has been added in the recent past, suitable for lectures, poetry readings and other literary activities. Four rooms downstairs mirror four rooms upstairs, divided by the staircase, with the kitchen in the basement.

Photograph: Wentworth House, known as Keats House today, where Keats wrote some of his greatest poems.
Posted by Glynn at 5:00 AM

From the Garden of Eden to the present there has been God's truth and Satan's lies.

GOD'S TRUTH: Genesis 2:17 "but of the tree of the knowledge of good and evil you shall not eat, for in the day that you eat of it you shall surely die."(NKJV)

SATAN'S LIE: Genesis 3:4 And the serpent said to the woman, "You will not surely die.(NKJV)

Today there are men telling God's truth, however, there are others who spreading Satan's lies.

GOD'S TRUTH: Mark 16:16 "He who believes and is baptized will be saved; but he who does not believe will be condemned.(NKJV)

SATAN'S LIE: He who does not believe will not be condemned; because there are many ways to be saved other than believing in Jesus.

SATAN'S LIE: He who believes is saved by faith only and should be immersed in water as a testimony of faith.

SATAN'S LIE: Water baptism is not essential to the forgiveness of sins; because baptism is a work of man.

SATAN'S LIE: Good works save us, believing and being baptized do not save us.

SATAN'S LIE: Men are saved by grace alone, God forces men to have faith so they can be saved by faith only.

SATAN' LIE: Men need to be immersed in water to join the denomination of their choice, however, they do not need to be baptized in order to go to heaven