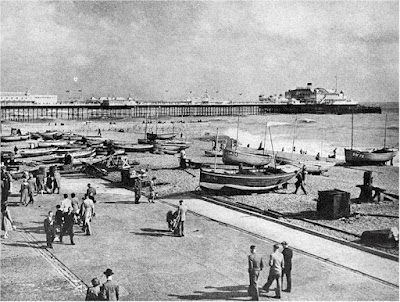 Inspector David Blest of Scotland Yard was “young for his job and looked even younger than he was.” He’s investigating what appears to be a suicide at one of London’s posh clubs. The deceased was also young, of a notable family, and had been seen arguing with Sir Leo Thyn, a noted lawyer, not long before his death.

Everyone, including Blest’s superior and the club management, wants the suicide quietly disposed of and filed away. But Blest isn’t satisfied, and especially concerning Sir Leo. He knows Sir Leo is going to Westbourne-on-Sea, a coastal resort town, and Blest decides to take his own holiday there at the same time.

After a few days of utter boredom and no sign of Sir Leo, Blest observes a frail young woman, Judy Wellington, arrive at the hotel, and is instantly smitten. Miss Wellington turns out to be the ward of Sir Leo, and an heiress due soon to come into her considerable legacy.

And then a murder occurs, and a near-fatal accident. Something’s afoot, and Judy is the target of it. Different villains are angling for her fortune, and thus the title Rogues’ Holiday, originally published in 1935 by Maxwell Marsh.

Marsh was one of the pen names of Golden Age mystery writer Margery Allingham, best known for her stories of amateur detective Albert Campion. Pen name aside, the mystery is vintage Allingham, with plenty of action, plot developments, surprises, and a solid dash of romance.

Blest finds himself drawn in the local police investigation and much more besides – a wild-goose chase, a kidnapping, and his own near-death. But he is determined to save Miss Wellington.

Often rather breathless at times, Rogues’ Holiday is action-packed and a fun read.