"Out of the Ashes" by Anthony Esolen 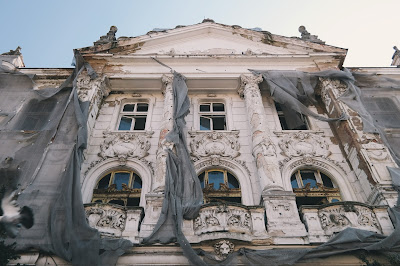 Whatever else it did, the election of 2016 reignited the culture wars in the United States. That likely means they had never really gone away in the first place, and were simmering below the surface, ready to erupt when a catalyst came along.

Where you find your own place in these wars will likely determine your response to Out of the Ashes: Rebuilding American Culture by Anthony Esolen. A professor of English at Providence College in Rhode Island, Esolen takes a rather dark view of contemporary American culture. And he defines culture broadly – politics, the arts, relationships, education, faith and religion, and even our definitions of beauty and truth.

It’s difficult to argue with him.

The book was written before the election, but it’s as if Esolen anticipated “fake news” and “alternative facts,” otherwise known as lying (or “misspeaking,” the clumsy word invented to cover making false statements). That’s his first critique of American culture – we lie about everything, and we believe what fits our own pre-existing or preconceived beliefs. 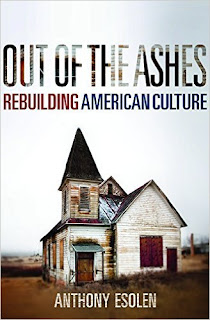 Esolen goes on. We’ve lost any concept of the idea of beauty. Public education, and higher education, are disasters. Our ideas of manhood and womanhood have been turned on their heads, if not obliterated. Our understanding of both work and play are seriously lacking, and those lacks have consequences. And out ideas of community participation and involvement are talking to our friends (people of like mind) on Facebook.

“So we need to clear out the garbage, admit our errors, and rebuild,” he writes. “When your only choices are repentance or oblivion, you repent.” Of course, we have entire industries that depend upon those errors continuing, regardless of the cliff they may be taking us toward.

This is an easy book to read and a difficult book to digest and accept. He speaks hard words, words that will produce outrage, especially among those who might classify themselves as progressive left.

On the current crop of students disrupting universities: “It is also something of a mistake to point at the students and laugh at them for being weaklings. The students hold the hammer and they know it. …In our world of inversions, power is granted to people who claim that they have no power and who resent the greatness of their own forebears. They do not seek ‘safety.’ They seek to destroy. The strong man is bound and gagged, and the pistol is pointed at his head – the seat of reason itself.”

In fact, Esolen argues that high education no longer occurs at most of our colleges and universities. It’s difficult to defend higher education when you take a look at what’s being taught in English and the so-called social sciences.

His solutions are radical. Some aspects of the culture will simply need to be allowed to collapse, while alternatives are developed and nurtured. Some of what he proposes may be politically difficult if not impossible.

Esolen is the author of The Politically Incorrect Guide to Western Civilization (2008) and numerous other books, including Ironies of Faith: The Laughter at the Heart of Christian Literature (2007); The Beauty of the Word (2012); Ten Ways to Destroy the Imagination of Your Child (2013); Reclaiming Catholic Social Teaching (2014); Defending Marriage: Twelve Arguments for Sanity (2014); and Real Music: A Guide to the Timeless Hymns of the Church (2016). He has also translated Dante’s The Divine Comedy and On the Nature of Things by Lucretius.

In 2016, Esolen spoke out against what he called Providence College’s “totalitarian diversity cult” in Crisis Magazine and sparked protests and demands for his punishment. The president of the college, a Catholic priest, affirmed his right to academic freedom but publicly criticized his stand on the college’s diversity efforts.

In Out of the Ashes, Esolen looks at culture holistically. It’s not simply a case of one aspect or one area being sick, but all of them. And each affects the others.

The book deserves serious consideration. It is a serious book making its case for fundamental, radical, disruptive change.

Photograph by Brigitte Tohm via Upsplash. Used with permission.
Posted by Glynn at 5:00 AM

This book isn't exactly my cup of tea, but I do feel a need to speak out against one paragraph:

"In fact, Esolen argues that high education no longer occurs at most of our colleges and universities. It’s difficult to defend higher education when you take a look at what’s being taught in English and the so-called social sciences."

I mean, good God. What is wrong with this man? The humanities are perpetually underfunded, students turned away, and devalued in universities all across America. My wife is an English professor who helps her students learn how to research, formulate ideas, and read perspectives outside their own. They have discussions of texts and learn to appreciate and interact with the ideas of her peers. She does her own research at great personal cost in order to expand scholarship on overlooked authors and meets with other professors in order to improve her teaching. She is surrounded by colleagues who are deeply committed in all of the same ways. Is the university system perfect? Nope. Does it need changes. Sure. But it isn't a problem with the majority of the teachers, especially the English teachers, who are largely underfunded and devalued by politicians and administrations. I'm sorry Glynn, but this guy's take on English professors is grossly distorted. I'm sure he's run into some bad apples in the bunch, but it's ridiculous to throw all of them under the bus, especially when the system is already against them.

In the 1980s, I was in a Masters program in liberal arts. I had been out of college for about a decade when I went back for a masters. What I experienced was that something had changed in that time, and I wasn't sure exactly what it was. The program I was in was interdisciplinary -- I had courses in the history and philosophy of science, literature courses, and history courses, including one of the history of the early Christian church (and this was about as secular a university as you could find). The difference was in the literature courses. It took me a while to figure out, along with discussions with fellow students and the professors, but what I came to understand was that the teaching of English literature as I had known it was changing, and rather profoundly -- it was in the first full rush of post-modernism and theories of deconstruction. What made this particularly difficult for me (and a few others in the class) was that the theory sounded like academic voodoo, and only seemed to be an excuse to attack the literary canon and replace it with -- something else. We had the carefully thread our way between the professors' beliefs and the integrity of our own work. And it was not easy.

That was one program in one university. By the time my sons went to college, things seemed to have changed yet again, and not for the better. They both went to the University of Missouri, eight years apart (and all of us lived through the recent "we need some muscle over here" blowup at Mizzou). After seeing what was happening in the humanities, we urged them both toward something else for their degree.

What Esolen is saying aligns with my own experience, and those of my children. I know there have to be English professors struggling to teach English and literature, but the broad sweep of higher education today suggests there are serious problems, and not only in English but extending to a wide range of the humanities. It's not only a question of funding and resources, but of what is being taught.