Tales of the First Age: “Beren and Luthien” by J.R.R. Tolkien 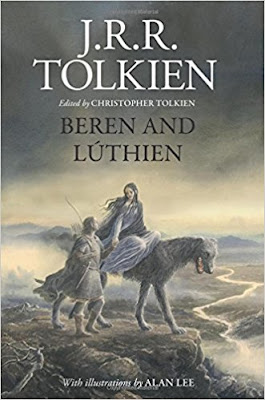 Christopher Tolkien, the youngest of J.R.R. Tolkien’s three sons, will be 93 this year. He is his father’s literary executor, and he has spent the years since his father’s death in 1973 poring over papers and files, considering an array of various texts, different versions of stories and poems, staying true to his father’s vision and helping publish a considerable number of books that represent both wonderful stories and insights into The Hobbit and The Lord of the Rings. It is because of Christopher that we have The Silmarillion, The Children of Hurin, many of the lost tales, the elder Tolkien’s translation of Beowulf, and many other works.

The latest, and possibly the last, is Beren and Luthien, a love story between Beren, a mortal man in exile after his father and clanare killed, and Luthien, an Elf princess (the idea of which was carried over into The Lord of the Rings). Luthien is also called Tinuviel by Beren, and it is by that name we see her part in the story. Beren sees Luthien dancing in the woods and falls in love with her. Her father isn’t exactly pleased, and he agrees to the marriage only if Beren can steal a Silmaril, a jewel in the crown of Melkor, the Black Enemy, also known as Morgoth – and a forerunner of Sauron in the trilogy. He’s captured and enslaved in the kitchen, and Luthien travels to his rescue. With the help of a giant dog (who tricks an evil cat), she succeeds in Beren, and then more adventures happen.