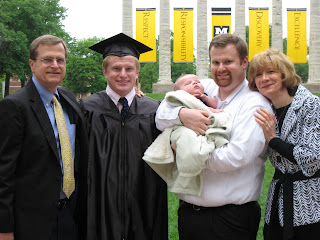 I’ve talked or mentioned both of my children here before, but I thought I would give a little more detail without embarrassing them too badly.

My oldest, Travis, is 30, is married to Stephanie and the father of Cameron. He manages a Hilton hotel here in St. Louis. And he blogs at Life Changes, Do We? His blogging was a real surprise because he never showed much inclination toward writing while he was in school. In fact, this was the child who told me during in his sophomore year in college, with real surprise in his voice, that studying actually helped him take a test.

He was born thinking he was an adult. He walked at nine months, and he walked for one day. After that, he ran. And he was quick. He tried to start my car in the garage when he was 2. He figured out how to escape from his baby bed by throwing the teddy bear over the side and then jumping on top the bear to cushion the jump. Or he slid down the curtains, bending the curtain rod.

He loved sports from the time he could watch television. We found him at 5 a.m. one Saturday morning when he wasn’t quite five, watching golf on TV. He loved (loves) all sports, but he especially loves baseball. He inherited that gene from his maternal grandfather; he certainly didn’t get it from his father, who once scandalized his wife’s family by saying he thought baseball was boring. I have since learned better. With Travis, we did Little League baseball for years. We did the teen leagues. We did basketball games. We did soccer. Did I tell you that I’m not sports-inclined? My mother-in-law beat me once in basketball – we were playing HORSE. And she was on crutches.

Our youngest is Andrew, who is 22 and gainfully employed with Farmers Insurance in Kansas City. We waited almost eight years to have Andrew, because Travis almost convinced us we would be a one-child family. Andrew arrived at the end of a very difficult year – the death of father, a blow-up at the church we were attending, and my career suddenly a shambles.

Andrew also likes sports, but has always been more selective about it than his older brother. He loves soccer, and I think his life’s ambition still is to own a European football team. He was always the quiet and rather shy one of the two boys, and I think we worried about him until his sophomore year in high school. He came home one day and said he’d been nominated to this national program, and he wanted to go to Australia for three weeks in the summer. Swoon we did, but we played it cool and didn’t let him see us in shock.

He went, and he came back almost a different kid. He snorkeled on the Great Barrier Reef, camped in the Australian outback in the winter, learned to crack a whip, spent four days with a family in Sydney and went to school with their kids. And the next summer he went to Europe with the same program, and harvested tomatoes on Malta, discovered gelato in Italy and thought Paris was a pretty cool place.

One of the coolest things about the two of them is that despite the almost eight years difference in their ages, they are really close to each another. Andrew was the best man at his brother's wedding.

They’ve both turned into rather decent adults. Yes, for a long time we didn’t know that would happen, especially the teen and college years. For both of them.

Just like their father. Except we still wonder about him.


To see other posts on children, please visit the One Word Blog Carnival over at Bridget Chumbley's place.
Posted by Glynn at 10:06 PM

I love this peek into your family. And the reminder of how uniquely God has created each one of us.

It's a very good thing that there are so many females in the world, given the numbers of males in your family alone. That is one strong gene set.

Love to see this side of you. I loved my two boys -- the rough and tumble guys they were. And every year just got better. Now that they are adults, it continues.

You have the sons and I have all the daughters. We actually have children close in age. My middle daughter, Kacey just graduated from East Tennessee State. My oldest, Tracy and middle daughter are exactly 8 years apart. My youngest daughter, Chelsea is 22 years old and sounds a bit like your son in wanting to own the team. Thanks for sharing the memories Glynn; you made me smile.

So great to get a glimpse into the Young family! I smiled when you mentioned you and your wife thought Travis might be an only child. There is 4 years difference between our kids. Mostly because I was still recovering from sleep depravation from the first one.

This is so cool Glynn. You can definitely sense your love for them.

You should be proud...this was a sweet post. I laughed at your basketball story...I bet that has been told a time or two in your family : )

They look like such cool brothers..awesome snapshot of them.

You give me hope, Glynn! My son just started high school yesterday, and the road ahead looks so long, given how long it's already been so far.

Excellent! You both must have done something right, and we wonder about you from time to time too, Glynn. :)

What a lovely glimpse of perfectly wonderful boys.

And for whatever reason, I don't wonder about you at all. : )

He was born thinking he was an adult. That totally made me smile. I am an adult trying to be reborn to think I'm a kid. :)

I love getting to hear more about your family, Glynn. Thanks for sharing your boys with us.

Oh! I love to see pictures of Cameron. :) Thanks for sharing so much about your guys, Glynn. Great crib escape plan, by the way.