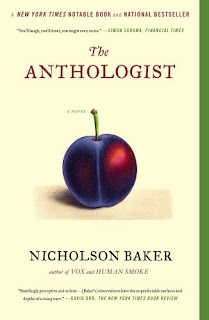 Nicholson Baker’s The Anthologist is one crazy read.

It’s about poetry. I think.

I know it’s about four-beat poetic lines versus iambic pentameter, a cruel invention by the French to upend what works best in English.

And the main character, a poet and writer named Paul Chowder, has no use for haikus, either.

I’ve read the first six chapters (our assignment for the book club discussion at TweetSpeak Poetry that starts today), and I don’t know whether to laugh or throttle Chowder in exasperation. Finish the introduction to the poetry anthology, Paul! By this time, I could have written it!

And it’s Chowder’s anthology – of poems that rhyme. Or mostly rhyme.

That’s the kind of poetry that isn’t written much any more. Free verse snuck its nose under the tent back in the Victorian area, and then it moved in like some undesirable squatter. An unwashed and undesirable squatter. Chowder can name two or three poems in free verse that are good, but not much more than that. 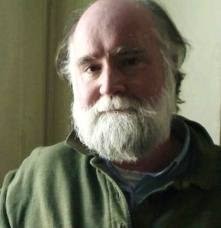 So he hides out in the barn, doing calisthenics, drinking and eating whatever’s in the refrigerator, musing about the neighbor next door playing badminton, walking the dog, dodging threats from his editor, mourning his girlfriend Roz who’s moved out – and not writing his introduction to the anthology.

Instead, he wants to tell us all about poetry.

And sleep with his books.

And I listen. I read on. Even if Chowder is driving me crazy, I listen. And I read.

The Droning of Haikus

The iambs overcome pentameter,
the four-beat line is dethroned.
Chartreuse battalions of syllabled haikus
swarm, and smother, and drone.

Anthology or mythology,
it rhymes for a time, and then,
it sits, embarrassed, and waiting for,
as the French would say, le Fin.

We are discussing The Anthologist over at TweetSpeak Poetry today. You should take a look and see what craziness Lyla Lindquist has dreamed up for the discussion. And tell her I’m still waiting for Chowder to finish that introduction.
Posted by Glynn at 5:00 AM

He does kind of drive a person crazy. And about the time I think that, he says something really funny, or really thoughtful, and I have to keep reading.

Even so, I think there is a certain type of medication that might help him.

Thanks for a great summary and thoughts here, Glynn.

This is probably a book I would not have picked up on my own but I'm glad (I think) to read it. I suspect Chowder looks a lot like Nicholson; at least, I want him to look like Nicholson. How he weaves poets and poems into this novel makes me laugh, and more than once has sent me to do a little research to see how factual some of the stuff is. It's a love story... and not just about one human's feeling for another.

I agree with Maureen. This isn't a book I'd typically have chosen and to whisper truth...is both irreverent and funny, which I'm not. Neither. But either way, its been an interesting read. I finished the first six chapters two weeks ago and carried around both the book and a notebook with all my favorite quotes waiting for the muse to nudge and words to flow. They didn't. Until they did. But it isn't funny or irreverent or in anyway Chowderesque, just me reading his words and spilling those that finally came. Wonder what next week will hold?