A Fun Day with Nancy 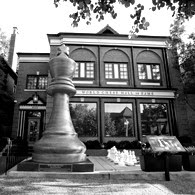 Nancy Rosback, my online friendship with whom goes back to when, well, we were a lot younger, has been in St. Louis for the past couple of days. Last night, Janet I met her and her childhood friend Faye Fullerton for dinner at the Tavern of Fine Arts. And virtual friendship became face-to-face friendship.

She and Faye visited the St. Louis Art Museum today, and then Janet I picked her up at her hotel. And we did what we call in St. Louis "the Central West End thing."

First, we went to the World Chess Hall of Fame. It's been in St. Louis for three or so years, and it occupies a former house / former business on Maryland Avenue in the Central West End. (The photo above is the exterior of the museum, with what is believed to be the largest chess playing piece int he world.)

The museum has three floors, and three changing exhibits. On the first floor is an exhibit combining composer John Cage and artist Glenn Kaino. The focus of the exhibit is a performance of Cage's Reunion in Toronto on March 5, 1968, in which 16 chess players (masters and novices alike) literally performed music each time they moved a piece on the chess board.

On the second floor was "Strategy by Design," an exhibit of the games and household items designed by Michael Graves. Graves designed a number of chess sets (among other games) for Target for several years running in the 2000s. Especially cool was a chess set whose pieces were designed to look like how the pieces can be moved on the chess board.

On the third floor was an an exhibit devoted to chess master Bobby Fisher, who wrested enough world titles from Russian players to break the monopoly Russia had long held on the game.

We checked out the hall of fame's gift shop. It's considered one of the best small museum gift shops in St. Louis, and with good reason.

After the chess museum we walked three short blocks to Left Banks Books, one of few traditional bookshops left in St. Louis. It's a local institution, and likely a labor of love on the part of its owners. It's managed to survive big box bookstores and Amazon, but it can't be easy. (Yes, I bought a few books. Janet wandered around the store. Nancy sat on the floor and read poetry.) Left Bank Books has one of those St. Louis 250th birthday cakes sitting outside the store. Someone deemed it one of the 250 most important sites in St. Louis (others being Grant's Trail, Busch Stadium, the Missouri Botanical Gardens, the art museum, and so on).

Then it was time to eat, which we combined with the plan for the evening. It was back to the Tavern of Fine Arts, for dinner and a poetry reading by Richard Newman, editor of River Styx Magazine. He read from his just-published collection All the Wasted Beauty of the World. 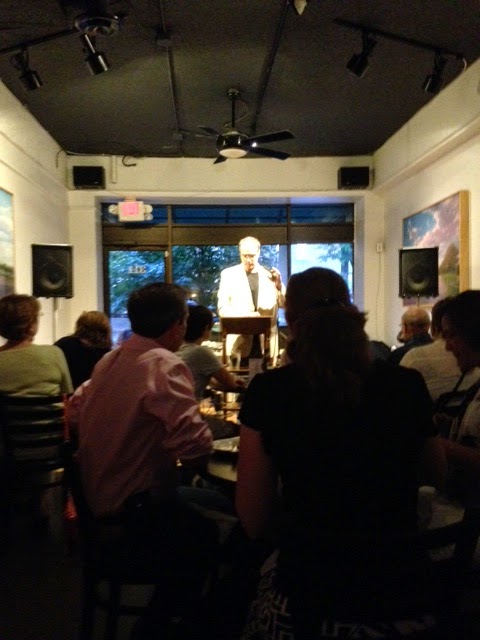 It was a great afternoon and evening, and it was great to spend it with Nancy.

Of course, you bought a few books.

What a wonderful day. I love when the virtual morphs skin.

This post also reminded me of when I was in 7th grade and traveled with my parents to Arizona (from Michigan.) My dad and I played chess with a little travel game set we held on the back of the passenger seat while Mom drove. That was back when there were no seat belts.

Thanks for the tour.

How wonderful, Glynn. And fun! The World Chess Hall of Fame sounds like a great place to visit.

Hoping somebody I get the chance Nancy's had to meet you and Janet.

Happy, happy when we can finally meet those cyber friends in person. Hope Danny and I can one day meet Janet and you in person. You've so unselfishly promoted my novels, and I think a long-distance relationship should, at some point in time, materialize. Let's wait and see if that's God's will.
Blessings, Glynn!

It was a blast!

That sounds wonderful--people and places!