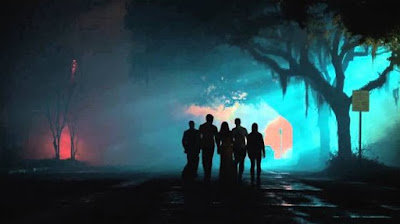 Last September, a movie about the Rapture – the “taking up” of believing Christians prior to the end times described in the Biblical book of Revelation – was released in theaters. Reception of the movie was so-so, and it seems to have disappeared rather quickly. After all of the “Left Behind” books by Tim LeHaye and Jerry Jenkins (with Nicholas Cage in the movie), perhaps there’s nothing left to the imagination about the Rapture and its aftermath.

The movie script for “The Remaining” was “novelized,” and Travis Thrasher was the author who wrote the book, published under the same title. I normally don’t read novelizations, but I’ve read one of Thrasher’s before, “Home Run,” and he writes good stuff, even if he has to work from rather weak scripts.

The book is profoundly disturbing. Perhaps it’s meant to be. But my response to it has lingered for days after finishing it.

The story filters the Rapture through that most commonplace of events – a wedding. Six friends have come together for the wedding of two them in Wilmington, North Carolina. They’re all from the area; they’ve all gone to school together. A year before the wedding, one of them, Lauren, had a series of horrific visions and dreams about her friends dying. But the visions had faded, and this is a joyful event for the couple getting married, Dan and Skylar.

The entire book is set in roughly a 24-hour time period.

It’s during the wedding reception that the Rapture happens, except the believing Christians aren’t “taken up” bodily. They simply drop dead, and it is their souls that are taken up. Lauren is the only one of the six who dies on the spot.

Chaos ensues. Explosions, plane crashes, trumpets sounding, fires, a ferocious hailstorm. Then comes the attacks by something – reptiles? Demons? It’s hard to see them clearly at night, but they’re attacking anything connected to faith, like church buildings, and anyone who is gaining faith as a result of the unfolding events. As events progress, the five remaining friends learn that this isn’t just happening in Wilmington but all around the world. Civilization as they’ve known it for all of their young lives had suddenly and horrifically come to an end.

Thrasher uses short chapters, and tight (and tense) writing to build the suspense and, yes, the horror. At times it’s difficult to keep reading, because it seems that all hope has been removed, and judgment is at hand. Telling the story through a wedding (taken from the movie script) somehow makes the narrative both terrible and compelling.

The effects of The Remaining still linger in the mind, though. And the heart. Thrasher has once again told a good, if horrible, story.


Top photograph: A scene from the movie by Affirm Pictures, a unit of Sony Pictures.
Posted by Glynn at 5:00 AM