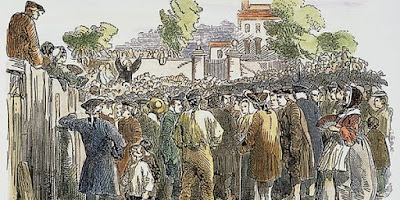 I recently finished reading If You Can Keep It: The Forgotten Promise of American Liberty by Eric Metaxas, author of the fine biographies of Dietrich Bonhoeffer and William Wilberforce, among a number of other works. I posted a review this past Monday, but one passage I read struck me silent.

Metaxas is talking about the 18th century evangelist George Whitefield, who with John and Charles Wesley were the key figures in the century’s religious revival known as the Great Awakening. Whitefield was many things out of the ordinary. He was cross-eyed. He came from a poor background. He was able to attend Oxford, but only as a “servitor” or servant to other students. He became friends with the Wesley brothers. He was ordained by the Church of England at the age of 21 when the minimum age of ordination was 23. 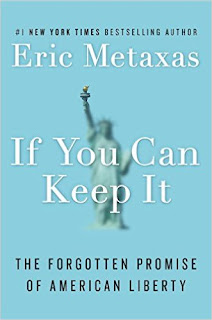 He began preaching in Church of England churches, and drew hundreds, and then thousands (much to the chagrin of the C of E establishment). After a visit to America, he returned to England, but found himself locked out of churches – the established Church wanted nothing to do with him and his dangerous, radical ideas. So he began to preached in open fields, on courthouse steps, in the streets, literally anywhere he could find.

He crisscrossed the Atlantic numerous times, giving more than 18,000 sermons and another 12,000 informal talks on both sides of the ocean. Here is the description by Metaxas of the time Whitefield spoke to several thousand coal miners in England, who had never preached to before: 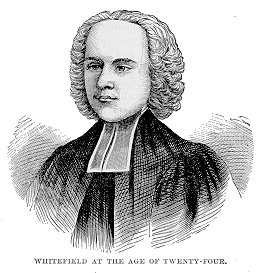 “No respectable minister in the Church of England would travel to such a godforsaken precinct, much less preach to these befouled savages, but Whitefield was doing what he knew Jesus had done: He was taking medicine to those who knew they were sick and offering freedom to those who knew they were captive. His heart went out to these despised outcasts, and with everything he had in him he preached to these men and women under the evening sky. He later wrote that the ‘first discovery of their being affected was to see the white gutters made by their tears, which plentifully fell down their black cheeks, as they came out of their coal pits.’”

This was repeated across Britain and in America. His and the Wesleys’ styles of preaching were so methodical that they were soon being called “Methodists.”

What no one anticipated was that it was Whitefield, more than any other individual, who was responsible for the colonists of the 13 colonies beginning to see the similarities in their various states and conditions – similarities which came to be known as “American.” George Washington may have led the Continental Army, but it was Whitefield who preached that men were equal in the site of God, and that God cared as much about the lowliest ne’er-do-well as it did about the rich and famous. Every person had equal value in the eyes of God. That idea, Metaxas writes, had never before been articulated on the face of the earth.

That idea is the idea we know of as America. We are equals in the sight of God, and we can be redeemed. American society was constructed on that idea.

A few weeks ago, Democratic presidential candidate Hillary Clinton gave a speech to supporters at a fundraiser in which she referred to half of the supporters of Republican candidate Donald Trump as “deplorables.” She called them homophobic, Islamophobic, and a few other choice “phobics” (she did her college degree paper on Saul Alinksy, which might explain her use of labels). 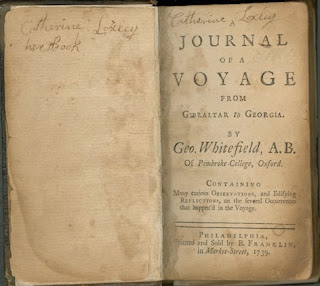 I don’t like Trump, at all, but I found her statement more than upsetting. A friend of mine, a Clinton supporter, called her choice of words “unfortunate,” but it was more than that. The nicest thing you can say is that her choice of words was that it was arrogant. The truest thing you can say is that it was ugly, and worse than ugly. And that’s because she went on to describe this “basket of deplorables” as “irredeemable.”

I know why I found what she said so upsetting. She was repudiating the very idea of what America has been about since 1775. And she was saying that God is wrong and some people are irredeemable.

Do you know what societies do to “deplorables” and those considered irredeemable? We are already seeing serious academics calling for people to be “educated” before they be allowed to vote (these proposals always seem to come from the progressive left). That’s only a first step -- stopped people from voting -- and it's one that happened to the Jews in early Nazi Germany. History is filled with examples of what can happen to “deplorables” and the “irredeemable.” Ask the kulaks in Stalinist Russia. Ask the Armenians in Turkey. Ask the American Indians and the Australian aborigines. Ask the thousands of victims of ISIS. Ask the untouchables in India. Ask the civil rights workers killed in Mississippi. Ask African-Americans who were lynched.

Those are the end points of language that starts with “deplorables” and “Irredeemable.” That a candidate for the presidency of the United States used that kind of language was shocking – and no better than the language used by her opponent.

Hillary Clinton, by the way, is described as a devout Methodist.

George Whitefield would walk past her, ignore her, and go preach to the “deplorables.” Because he knew their hearts as his own, and because he loved them. He knew better than to call them “irredeemable.”