St. Valentine’s Day: A Girl, a Priest, and a Letter 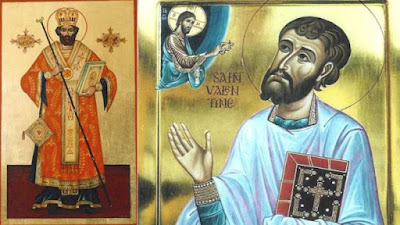 He laid down his quill and took a deep breath.

He had been there for weeks, and it was easy to lose track of time. He sat on the floor of his cell among the soiled rushes, closing his eyes, if not his nose, to the smell. His crime was to have performed marriage rites for soldiers. He could do that for Christians, as long as the authorities turned a blind eye, but not for soldiers. Soldiers could not marry.

His had been a two-fold crime: marrying soldiers, and being a Christian. His faith, like the faith of others, was usually overlooked until someone in authority needed a bout of intolerance and finger pointing.

His execution was tomorrow, death by beheading, a sentence customary for Roman citizens. He had been allowed to write a final note, and that’s what he was doing now. It was not a note to his church, his faithful, nor to his family. No, his final note was to the young woman, the daughter of his jailer. She had been dying, consumed with a raging fever, when her father, under the cover of late darkness and a bribed guard, had walked him, his arms and feet manacled, to his daughter.

Illustration: Traditional paintings of St. Valentine.
Posted by Glynn at 5:00 AM

Ironically, although this Saint's Feast Day is probably the most globally famous of all, it was dropped from the Church Calendar following the reforms of Vatican II.
February 14 is now the Feast of the 9th century sainted brothers Cyril & Methodius.