"On the Shoulders of Hobbits" by Louis Markos 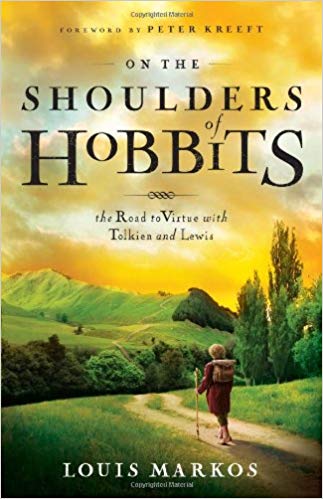 I first read J.R.R. Tolkien’s The Hobbit and The Lord of the Rings in the late 1960s, using what I didn’t know were pirated editions published by Ballantine. I reread authorized editions in the mid-1970s, and again in the early 2000s when the Peter Jackson movies were released. My youngest and I saw the movies three times each at the movie theater. We also watched the DVD of each movie. And the extended DVD set.

I read The Chronicles of Narnia by C.S. Lewis in the mid-to-late 1980s, when our oldest was six or seven years old and loved being read to. The hands-down favorite character for all of us was Reepicheep the Mouse, a humble character called to great things much like Tolkien’s Bilbo and Frodo Baggins.

Over the years, I’ve bought a lot of books by and about Lewis and Tolkien. On one of our trips to England, I spent two hours in Blackwell’s Bookshop on Broad Street in Oxford; I stared in wonder at the whole section devoted to the two authors and the Inklings. If there is heaven on earth, it is called Blackwell’s in Oxford.

Facebook has taught me that I am not alone in my admiration for Lewis and Tolkien. We are legion.

When a scholar like Louis Markos publishes a book about both authors, it’s an event for Lewis and Tolkien fans like myself. And rather than rehash what we already know, On the Shoulders of Hobbits takes a fascinatingly different approach – it considers The Lord of the Rings and The Chronicles of Narnia as guideposts to the classical virtues, like courage, friendship, temperance, discernment, justice, faith, hope, and love.

Markos begins with the road, or the journey, featured in both of the works. He considers the call of the road, the response to it, its dangers, and what happens at the end. The road isn’t necessarily a physical one; it can be any kind of extended task that’s fraught with difficulties and where the outcome is by no means certain. He moves then to discuss the classical and the theological virtues, and the roles they play in both stories. And then he examines the idea and problem of evil, and how it is portrayed, confronted, and battled.

Markos is a professor in English and Scholar in Residence at Houston Baptist University. He speaks widely on C.S. Lewis, J.R.R. Tolkien, and the Christian worldview. His books include Atheism on Trial, Apologetics for the 21stCentury, From Achilles to Christ, Worldview Guides to The Iliad, The Odyssey, and The Aeneid, C.S. Lewis: An Apologist for Education, Lewis Agonistes, Literature: A Student’s Guide, and Heaven and Hell: Vision of the Afterlife in the Western Poetic Tradition. He lives with his family in Houston.

On the Shoulders of Hobbits also serves a good reminder that great stories about virtues, the call of the road, and fighting evil aren’t only for the young. That’s what the book is ultimately about – what good stories like these can teach us, no matter what our age or experience or station in life.

After all, Frodo Baggins was 50 when he leaves the Shire with the ring to travel to Rivendell.

Related: The Road is Long, and the Call is Loud - at Literary Life.
Posted by Glynn at 5:00 AM

Email ThisBlogThis!Share to TwitterShare to FacebookShare to Pinterest
Labels: book review, C.S. Lewis, J.R.R. Tolkien, Louis Markos, On the Shoulders of Hobbits, The Chronicles of Narnia, The Lord of the Rings, virtues

This sounds really interesting Glynn. I've read Chronicles multiple times but other than The Hobbit years ago have never been able to read LOTR. I think it was because I saw the movies first. I'm suspecting that was a no-no. But this book does sound intriguing since it deals with values.

Yet another book to put on my wish list! I'm such a huge fan of both Tolkien and Lewis, I'm simply going to have to read this at some point.
Blessings, Glynn!