A Love Affair with Chad and Jeremy 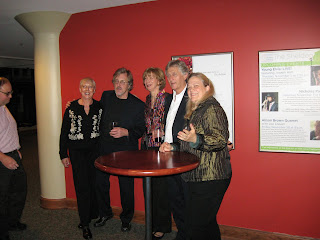 (From left, Anita from Albuquerque, Chad Stuart, my sweet wife Janet, Jeremy Clyde, and Nancy Emrich of LilFest in Chicago.)

Last night, about nine months of planning, anticipation and work by my sweet wife came to fruition with a concert by Chad and Jeremy at the Sheldon Concert Hall in St. Louis.

If you’re not familiar with Chad Stuart and Jeremy Clyde, they are a singing duo who were part of the “British Invasion” of the 1960s. My wife met them when she was 12, after a performance at the Louisiana State Fair in Shreveport. She’s been in love with them ever since. I understand, and I am not jealous. I also know the words to all of their songs, because I’ve heard them enough over the years. If I knew how to sing, I could probably do the karaoke version of everything they ever recorded.

They broke up in the late 1960s. Jeremy went to pursue an acting career (playing lots of villains, oddly enough) and Chad pursued music. Today Jeremy lives in London and Chad in Sun Valley, Idaho, and they get together several times a year to perform.

We’d seen them in St. Louis in 1986, when they were touring as part of the “British Invasion Tour Part 2.” I remember it well because we were early for the event. I mean, like an hour early. So early we were first in line at the door. If you think I’m emphasizing “early” because we’re usually late for everything, you’d be right. Chronic lateness in my family is not a problem; it’s a condition. You can’t solve it; you have to endure it.

In May 2008, I had to give a talk in Chicago at a conference, and it happened to be right before Mother’s Day Weekend. And guess who was doing three concerts in Chicago? My wife found about this from the Yahoo message board on Chad and Jeremy, where she was also meeting fans like herself all over the country. Coordinated by Nancy Emrich of LilFest, the duo did a house concert in Wilmette, which was the coolest thing ever, then an auditorium concert, also in Wilmette, and finally one at Bill’s Blues Bar in Evanston. My wife was thrilled, so thrilled she began to work on how to get them to St. Louis. And she knew the perfect venue, too.

She knew one of the marketing people at the Sheldon Theater through an old neighbor of ours. She contacted him, and then connected him to Chad and Jeremy’s booking agent. It took some period of time but one day, there it was – they were coming to St. Louis Oct. 23, 2009.

We saw them again in Chicago this past May, and our next-door neighbors in St. Louis joined us for the concert at Bill’s Blues Bar (they have grown children in Chicago; he’s also an gifted musician). Ever since, my wife’s been plotting how to help the Sheldon promote the guys who recorded “Summer Song,” “Distant Shores,” “Willow Weep for Me,” and a bunch of other songs that spoke directly to my wife’s teenaged heart in the late 1960s and continue to speak to her heart today. She worked tirelessly, handing out and posting flyers on every bulletin board in St. Louis, tweeting it on Twitter, bugging me to retweet and post on Facebook. Me, I go along for the ride. It’s magic to watch my wife be transformed into a 14-year-old again.

And magic reigned at the Sheldon last night. The theater seats 700; about 600 people were there, an unusual number, given the economy, according to the people who know this stuff. And it was a wildly enthusiastic audience – you could literally see the audience energize Chad and Jeremy and vice versa. And I watched all the concerns my sweet wife had for this being a success melt away, and she became a fan again.

Glynn, it's so obvious (and grand) how much you love your wife! Isn't it just the best thing ever when a wish comes true? I'm glad your wife's did, and that you got to share the dream with her and in turn with us.

i agree, that is pretty cool.

I'm very happy that this all worked out for you all. It's nice to see the blood, sweat and tears pay off for good people :).