A Running Descent into Kindness 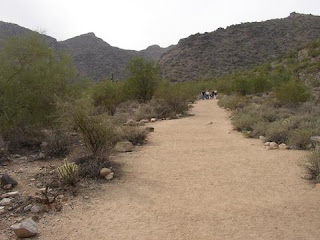 It was cool, and the view spectacular, as they hiked down from the summit, but Maggie was miserable. She hadn’t wanted to come on this youth trip, she didn’t like the youth group, she didn’t want to be part of this group activity, she hated what she looked like, she couldn’t stand her frizzy hair or her weight that stayed pudgy no matter how little she ate, and all she had around her were slim, confident girls with their straight hair and lilting voices and confident, flirty laughs and sideways glances at her frumpy clothes. And her hair.

Her parents had made her come. This was a rite of passage in the church youth group, this nightmare of a camp in the mountains. Everyone played nice, of course, because it was a church group, after all, and you didn’t want Jesus to think you thought yourself better than someone even if you knew you were. And all the girls were like that. Maggie wanted to scream sometimes, but she only cried when no one was around. She didn’t say much, because she was afraid of sounding stupid. The group leader tried to encourage her and get the other girls to include her in activities but it was hopeless. Maggie was all of 15 and felt either four or 40.

The trail down was wide but steep. Suddenly two boys at the front of the line broke into a run, yelling “Race ya!” as they took off. The rest of the group, 34 strong, followed, and Maggie suddenly found herself running downward, knowing at any moment she was going to trip.

Which she did. A half-buried rock caught her foot, and she tried to stay upright as she stumbled wildly across the trail, finally hitting a fallen tree and landing across it with a thud. It knocked the wind out of her, and she just lay there on the trunk, like a slug, not moving. She heard the laughter, and she felt the hot flush of shame and humiliation.

Then she felt hands on her shoulders, and his voice, the voice of the boy new to the group because he was dating one of the girls; he wasn’t even a member of their church. He was nice looking enough but not one of the handsome jocks; he’d been immediately accepted by the in-crowd because of his girlfriend. Maggie, are you okay? Are you hurt? Does anything feel broken? Take a deep breath. His voice was gentle, coaxing, soft. She was shocked that he knew her name. He pulled her back from the tree as she coughed and caught her breath. Does anything hurt? She shook her head. He stared into her eyes. Did you hit your head? She shook her head again.

His girlfriend stood behind him, staring. He smiled. We’ll walk you down the rest of the way. You need to be checked by the nurse. The youth group leader finally caught up with them, and together they finished the descent.

She spent the night in the infirmary, and was discharged in time to join the group in the large cafeteria for breakfast. She was sore and bruised, but nothing was broken or damaged. She found the group, and there he was. He looked up and smiled. “Maggie, how are you doing? Is everything OK? Guys, make some room here.”

She never saw him again after the trip; he and his girlfriend broke up and he went back to his family’s church.

But she never forgot him.


This is one of the contributions to the One Word Blog Carnival on kindness over at Bridget Chumbley’s place, One Word at a Time. This story, by the way, is true, or mostly true. It actually happened in the summer of 1968. “Maggie” is not the real name of the girl. What that young man did that day taught the entire youth group something about kindness.
Posted by Glynn at 10:12 PM

I love this story and what it represents. If only more people understood how much a simple act of kindness can impact another...

Thank you for this, Glynn.

Gaaa! That made me cry! Of all the traits I pray my kids learn, it's kindness -- especially kindness towards someone who others deem unworthy. Now fess up. That boy was you, wasn't it?

I was thinking the same as Katdish ...

I agree with Bridget - if more people understood the impact they could have with a simple act of kindness, perhaps they'd feel more empowered to do them.

What a wonderfully told story, Glynn. A perfect example for today's Blog Carnival.

Beautiful Story! Praying for kindness for myself and my boys.

Oh wow, this was so well told, Glynn. A little kindness goes such a long way.

What Kelly said.
I was that girl for a looong time. And so many, even myself, could have used that lesson at just that time.
Thanks Glynn :)

Great story. Isn't it crazy how God takes small tiny moments and infuses truth into them that people don't ever forget? For Maggie, the moment was small, but the truth was huge.

the summer of 1968...
this is an really good story, told well. a story of seeing the outcome of the work of the Holy Spirit in someone's heart reaching another person's heart.
beautiful.

Yep. I was the misfit. Until college, really. Once in college, it seems people appreciate a little quirkiness. But not in High School. No. Not there...

I am that girl. Kindness transforms.

"But she never forgot him." Kindness definitely has that impact. Great post Glynn!

I SO want my [FIVE YEAR OLD] son to be that guy. I want my girls to be confident & happy but most importantly kind.

A beautifully told story - SO evocative of those awkward teen years. Also, one that will stay with me as I raise these kids.

Oh man can I relate to Maggie!! I was that gal with the giant head of too-curly hair when straight hair was in, awkward and moody. We survived though didn't we?! Great story :-)

Aw shucks Glynn, You made me cry!

What a beautiful and beautifully told story.

A wonderful story with a wonderful point. I can relate to the youth group thing for sure. Having two sons and a daughter it was a great reminder of how important it is to teach them kindness. Thanks!

I look forward to one day meeting that not-so-young-anymore gentleman.

We never know how far reaching an act of kindness may be.

I have been each one of these characters at some point in my life. Thank you for sharing such a poignant story, Glynn. And thank you for stopping by my place!