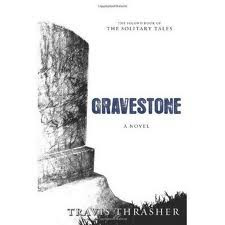 Travis Thrasher has written a number of novels, in a number of genres – romance, suspense, contemporary adult and (borderline) horror. Last year, he started a four-part Young Adult series with Solitary. The second novel in the series is the recently published Gravestone, and I devoured it, and on Kindle, no less – the first book I’ve read on Kindle.

Chris Buckley is a high school junior living in Solitary, North Carolina, having moved with his mother from Chicago following his parents’ divorce. Solitary is a strange town, and the longer Chris is there, the stranger it gets. In Solitary, he has what he thinks are the typical new-kid-at-school experiences – the bullies, the looks, the giggles. He meets and falls in love with a girl named Jocelyn. Gradually he comes to understand that nothing is what it seems in Solitary. Nothing. And instead of small-town life, Chris finds evil. And evil finds Jocelyn.

In Gravestone, Jocelyn is gone, mourned and missed by Chris. And the evil is growing more intense. His alcoholic mother claims to be threatened – by people in their own house. One of Jocelyn’s friends and her family move away, suddenly. Another friend comes to understand what has happened to Jocelyn, and tries to help Chris. And there’s the pastor of the town’s big church, whose wife isn’t seen any more and who – as far as Chris is concerned – radiates evil.

It’s not all bad. Chris goes to work for an elderly woman named Iris who operates a remote inn, and she's completely different. He meets a girl named Kelsey in his art class, whose family is refreshingly normal. And the son of his missing Uncle Robert finds him, and wants to help him.

Part of Gravestone is Chris having interior conversations with himself, much like any teenager would, except most teenagers don’t have these kinds of experiences to live through. The novel is fast-paced and action-packed, and the story itself is riveting. Best of all, Thrasher is a fine writer. The creepy characters have just enough humanity in them to avoid stereotypes, while the good characters have their flaws and failings. And the novel keeps packing a punch and never stops.

Gravestone may be aimed at the Young Adult market, but this older adult was wowed by a great story.

My review of Solitary.

Travis Thrasher's web site.
Posted by Glynn at 5:00 AM

I am reading Sky Blue right now. And I'm just devouring it. :)

I'm a sucker for a scary movie, but terrified of scary books. I don't know what that's about. This post had me all freaked out - in a good way.