He got it done

We’ve been reading Nicholson Baker’s novel The Anthologist over at TweetSpeak Poetry, and today we finish it. 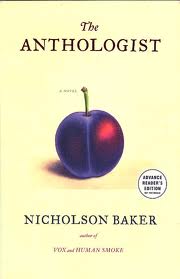 For about two thirds of the novel, I was ready to strangle the main character, a poet and critic named Paul Chowder. Chowder is trying to write the introduction to an anthology of rhyming poems that he’s assembled, and has either the worst case of writer’s block or the worst case of EPD (Extreme Procrastination Disorder) or both that I’ve ever heard of.

I haven’t been this aggravated with a main character since Peter Mickelsson in John Gardner’s Mickelsson’s Ghosts (published 30 years ago). Mickelsson kept using his credit card long after it was maxed out, remodeling an old home that simply wouldn’t be finished. In the case of Paul Chowder, it is an introduction that would even be started.

In these final chapters of the novel, we get another discussion of the evils of iambic pentameter, invented by the French for their language and imported into England by Geoffrey Chaucer (lesson: never trust a diplomat). Chowder is still missing his girlfriend Roz, but there seems to be some hope they will get back together. He’s preparing for a trip to Switzerland, where he will be part of a conference panel and teach a class. I am not surprised when he discovered four days before his flight leaves that his passport is expired.

But he makes it to Switzerland, he makes up (to some extent) with Roz, and he writes 23 poems on the airplane home. And – at last! – he writes the introduction – 230 pages of introduction.

We don’t learn much about what’s in the introduction, only that it’s written and packed off to the editor, who accepts it with vague murmurs of “we need to cut it.”

And it did what good introductions do – it explained why what was to follow was important. It placed the subject in a context. It gave you insights you might have missed or not understood otherwise.

It also injected the personality of the anthologist into the poems to an extraordinary degree, but isn’t that one of the things that poems, really good poems,  can do – pull you into them, pull you into another world, into the mind and heart of the poet so closely that it becomes your own mind and heart?

As much as I would have liked to chuck a rock at his head, Paul Chowder taught me a few things. And I liked his self-deprecating humor and lack of inflated self-importance. I also liked the fact that he decides (wisely) not be try to teach again but instead to help paint houses.

There is much to like in The Anthologist, and much to learn. I’m glad I hung in there for the entire ride.

To see what’s happening (and concluding) discussion about The Anthologist, check out what Lyla Lindquist has to say at TweetSpeak Poetry today.

My two previous posts on The Anthologist:

We Still Don’t Have an Intro
Posted by Glynn at 5:00 AM

I always think it's a good book when I get so engaged with a character I want to strangle them!

As always, you leave me wanting to go out and buy it right away!

I still think this is a love story of a sort. It had a happy (if a bit anticlimatic) ending, and Roz did what I hoped she'd do. She understands boundaries. When you've got a Chowder in your life, boundaries are important.

I like how you came to see this book. That Baker's a clever writer.

"a reader would be certainly be more apt to read introductions if they were written this way."--made me think of the author's notes of Piers Anthony. Some of this type of thing is now in his online newsletter.

it was quite a ride, wasn't it? i would like to get off the rhyme bus though. it has a way of getting stuck in your head.

You and Lyla have presented this book in a most extraordinary way.

Half the time I was thinking this would have made a terrific textbook in my high school lit class. What a disarming and engaging way he had of pulling the reader in -- even a little against his will, eh Glynn?

Glad you were along.