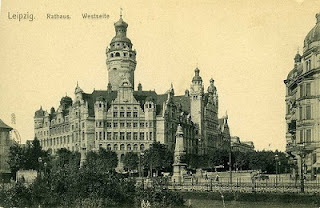 It’s early 1945. Hitler’s Germany is teetering; the eastern and western fronts are drawing close to German borders. But the Nazis are making one last-gasp effort with a rain of V-1 and V-2 rocket bombs on London, and German scientists may yet pull a rabbit out of a hat with a new jet fighter plane.

Ed Scanlon, an American army captain, is dropped behind enemy lines, to help local partisans in Leipzig disrupt German war efforts. The partisans are led by Hanni Steiner, a young communist who also happens to by an agent for Stalin’s NKVD. They work together, have a passionate affair and fall in love, roughly in that order. Scanlon is captured and taken to Gestapo headquarters, where he’s brutally tortured. Hanni organizes a daring rescue raid on Gestapo headquarters, and Ed is finally transported to safety in England. 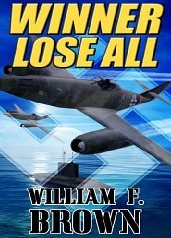 But the Americans and the Soviets want those German jet fighter scientists. Scanlon, still recovering from his ordeal, is sent back to Leipzig. His primary motive for returning is to find Hanni, who’s been arrested by the Gestapo. He’s also to work with a German army officer to find and get the scientists to the American army in Bavaria. The head of the Leipzig Gestapo is working with the Soviets to get those same scientists to Russia. And the British would prefer that neither side get what they want.

In Winner Lose All, William Brown has written another crackerjack novel of World War II, following last year’s Amongst My Enemies. The descriptions of the events, the people (including Stalin, Beria and Churchill) and the geography re so detailed and vivid that the reader is right there, carried along for one wild, breathtaking ride.

And in the process, Brown explores the themes of courage and treachery, love and fear, playing them through the characters in ways both real and often surprising. Who “wins” the triangulated race to get the scientists – and perhaps supreme power in the post-war world – may also be the one who loses the most.

Winner Lose All is an exciting, riveting read.

Illustration (top): Leipzig Town Hall prior to World War II.
Posted by Glynn at 5:00 AM