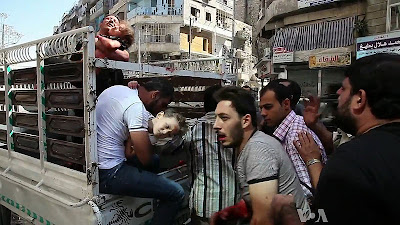 I’ve published this blog for more than four years now, and the one subject I’ve largely (if not completely) avoided is politics. Opportunities to talk about politics abound, but I prefer to let others seize them. An argument can be made that the state of American politics has almost always been abysmal, even if today we seem to be searching for new depths. And I’ve generally avoided the subject.

It will be no surprise that I lean to the conservative side. I used to lean a lot more to the conservative side, until the inept response of government at all levels to Hurricane Katrina. People died because of that inept response. And then to learn that the ineptness had been a disaster waiting decades to happen – poor construction of so many of the levees – well, it was more than I could stomach.

I didn’t think the ineptness of Katrina could be surpassed.

What my government was preparing to do in Syria – after so badly mismanaging what had come before, not only in Syria but also in Libya and Egypt – compelled me to write letters to my two senators and my congresswoman, urging them all to vote against military action. We’ve demonstrated we don’t understand what’s happening in Syria, and why we believed military action would solve the problem we didn’t understand in the first place was beyond me.

And we still don’t understand the problem. What is happening in Syria is not the good guys versus the evil government, but some good guys (we’re not sure who they are, though) and some bad guys (remember al-Qaida?) sometimes fighting the government, and sometimes each other. And caught in the crossfire are both innocent Muslim civilians and innocent Christian civilians as well. (And here's an interesting note: Christians are being killed and churches destroyed, and not by the Assad government.)

Of all the things I’ve seen and read, what’s made the most sense to me are some comments by Christian speaker and apologist Ravi Zacharias. And it makes the most sense because all we have right now are questions and uncertainties, and no real understanding of what's happening in Syria, or why.


Top photograph: Wounded civilians arrive at a hospital in Aleppo, Syria, October 2012; photo courtesy of Wikipedia Commons.
Posted by Glynn at 5:00 AM

Thanks for posting this.

We used to think the Cold War was dangerous. Suddenly it seems far more safe and predictable than what is happening now...

It is true. What Mr. Z. really thinks, the leaders of this country do not, can not and will not understand. It is not political, it is a matter of not being able to see what is truth.

Oh, amen. I have not written, primarily because I cannot come up with anything cogent or even coherent to say beyond, PLEASE DO NOT DO THIS, IN THE NAME OF ALL THAT'S HOLY AND GOOD, STOP. What a mess. I actually hope that this may become one issue on which both liberals and conservatives might agree - wouldn't that be something!

I listened to Ravi's thoughts yesterday and realized how complicated and misunderstood (if anyone can really fully understand)the situation is. Thanks for your thoughts Glynn.

Ravi is a preeminent thinker and apologist'. He makes perfect sense here

Ravi is a preeminent thinker and apologist'. He makes perfect sense here

I've never heard of Ravi. Interesting interview though I wish he would have said some of the things it seemed like he was holding back about politics.