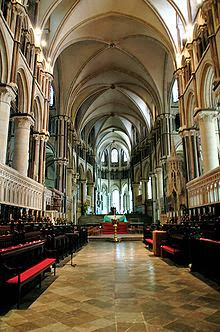 Earlier this month, we had the privilege and blessing to spend two weeks in London. And on one day, we took the train to Canterbury.

In my ignorance or perhaps arrogance, I thought I would prepare for our Canterbury visit by reading Chaucer’s The Canterbury Tales (modern-day prose version; I’m not into Old English).

It’s one of the seminal works of the English language, and Chaucer, Shakespeare, and the King James Version of the Bible largely accomplished what we know today as English. And I had a new purchase on my Kindle – Peter Ackroyd’s translation of Chuacer’s great stories.

I started reading on the plane to London, and continued reading once we arrived. But it took actually going to Canterbury to realize I had read the wrong thing. Chaucer might be a preparation for taking the trip to Canterbury,a nd our train from London stopped at so many places that I might have read the entire work in the time it took to get there. (I exaggerate.) (Slightly.)

The temptation is to think, especially in a place like England, that Canterbury would be “just another cathedral.” And cathedral it is, and a beautiful one that managed to survive Henry the VIII, Oliver Cromwell, and Hitler’s Luftwaffe. It might be argued which one was the more destructive; the cathderal’s audio tour made it clear that Cromwell will never be forgiven.)

But Canterbury turned out to be more than the cathedral it is, much more.

At 3 p.m., as I stood in the choir of this great cathedral, a voice came over the loudspeaker, asking everyone to remain in place for a short prayer. Hundreds of people stopped whatever they were doing or looking at, and we listened.

It was a short prayer, followed by a request to join in the saying of the Lord’s Prayer. And in that moment, hundreds of voices began to recite the well known words.

We were British, American, French, German, Japanese, Chinese, various African nationalities, Russian, Eastern European, Spanish, Italian – and we all recited the Lord’s Prayer together. In English. I was standing next to a sizeable group of Japanese tourists, and they all recited the prayer in English.

We were all in the middle of this beautiful edifice called Canterbury Cathedral, hundreds and thousands of miles away from our homes.

And in the moment, we were the church.

Photograph: The choir of Canterbury Cathedral, where I stood during the prayer time.
Posted by Glynn at 5:00 AM

Always wanted to go there, Glynn, but thanks for reminding us that prayer goes everywhere. What power we have as the church anywhere and everywhere as we pray The Lord's Prayer! To encourage other members of our Christian Poets & Writers group on Facebook to see this, your post will be highlighted on the blog - http://christianpoetsandwriters.blogspot.com. God bless.

Isn't it a magnificent church? Your post makes me want to go back to England. Each time I've been has been wonderful.

Oh, what a marvelous moment you describe here! I have been to Canterbury Cathedral years and years ago. Just an awesome place . . .
Thanks for sharing with us, Glynn!