“Sidney Chambers and the Shadow of Death” 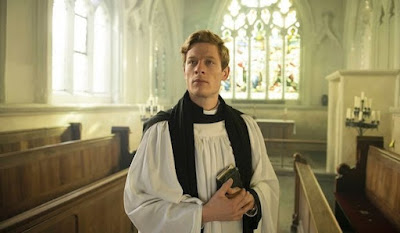 It is England the early 1950s. The ravages, personal and national, of World War II are still visible and felt. A young bachelor canon is assigned to the small parish of Grantchester , near Cambridge. He still experiences flashbacks to the war, where he served with distinction. He finds a bit too much solace in the bottle. His sermons tend to be largely about love, trust and forgiveness, but he seems to have trouble trusting and forgiving himself.

Unexpectedly, he finds himself embroiled in murder, and discovers he can go places and talk to people in ways the police cannot.

If you’re a fan of The Grantchester Mysteries, you will recognize the story line. The first series has shown on PBS here in the United States; the second has recently completed filming in the U.K. and will be aired in 2016 on ITV and (it’s hoped) PBS. Actor James Norton plays the title character of Canon Sidney Chambers. 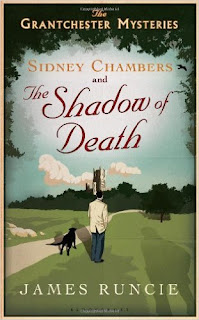 The series is based on the short story collections of author and film producer James Runcie. The first book in the series is Sidney Chambers and the Shadow of Death, a collection of six mystery stories featuring the canon, four of which were filmed as episodes in the PBS series.

In “The Shadow of Death,” what looks like an obvious suicide turns out to be something else entirely. In “A Question of Trust,” an expensive engagement ring goes missing at an engagement party. “First, Do No Harm” concerns the suspicions of the local coroner about elderly people dying a little too soon before their times. In “A Matter of Time,” a young woman is strangled in a London nightclub in Soho, apparently in full view of everyone there (including Sidney, who loves jazz). “The Lost Holbein” concerns the forgery and theft of a valuable painting of Anne Boleyn. And in “Honourable Men,” a local aristocrat is killed during a performance of Shakespeare’s Julius Casear.

In the first story, Chambers develops a friendship with the local police inspector, Geordie Keating, a friendship that becomes a central feature of each of the stories.

The first four stories formed the basis of the four television episodes of The Grantchester Mysteries, but as television producers tend to do, a number of liberties were taken with the written stories. Relationships were condensed and combined; story lines were greatly simplified. And few of Sidney’s occasional spiritual ruminations are included on television. While a fan of the TV series, I found myself liking Runcie’s stories more – they’re more thoughtful, more nuanced, and a bit more provocative. And a one-night stand between Sidney and a jazz singer in London that is featured in one of the television episodes is nowhere to be found in the written stories.

Runcie has published two other Sidney Chambers mysteries – The Perils of Night (2013) and The Problem of Evil (2014), with the fourth in the series, The Forgiveness of Sins, being published this year. He’s also written four novels. In 2014, he explained in an article for the Telegraph how the inspiration for Sidney Chambers came from his father, the late Robert Runcie, the former archbishop of Canterbury.

If you’re familiar with the format of John Mortimer’s Rumpole of the Bailey stories, you’ll be comfortable with the format of The Grantchester Mysteries – a collection of short stories that share characters and themes and come to seem like a novel.

Related: The trailer from Grantchester’s introduction in 2014:


Top photograph: James Norton as Canon Sidney Chambers in The Shadow of Death.
Posted by Glynn at 5:00 AM