The Art of World War I

We were at an art exhibition entitled “Out of Chaos,” sponsored by the Jewish Museum of Art in London at the Courtauld Gallery. It wasn’t a huge show, some six smallish rooms, but if it lacked in quantity it more than made up for it in depth and quality. The idea behind the exhibition was to show 100 years of Jewish art in London. 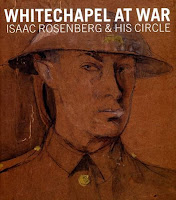 A number of works in the exhibit caught my eye; one was a self-portrait by Isaac Rosenberg (1890-1918). I was familiar with his work as a poet; he’s one of the so-called “World War I poets” who produced some wonderful poetry during the war. I wasn’t as familiar with his art. Eventually, I was able to get my hands on Whitechapel at War: Isaac Rosenberg and His Circle, an exhibition book for a show of the same name held in London and Leeds in 2008. And I learned that Rosenberg was not only one of the World War I poets, but also a member of a group of artists known as the “Whitechapel Boys.” (Another was artist David Bomberg, who was represented in the “Our of Chaos” exhibition with several paintings.)

At that point, several exhibitions began to converge – the First World War Galleries at the Imperial War Museum in London; this “Out of Chaos” exhibit at the Courtauld, and then one we saw just recently, at the Mildred Lane Kemper Museum in St. Louis: “Images of War, War of Images.”

It’s no surprise that there are a number of exhibitions, artistic and historical, about World War I; we are about right in the middle of the war’s centenary. What’s fascinating is that there were essentially three kinds of art that developed through and because of the war: “official art,” like that commissioned by the British military of artists like Paul Nash; paintings and drawings that artists who served in the war did, often to help them make sense of what happened; and the art used for what we can only call wartime propaganda. 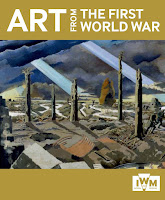 Like the poets telling their stories in theor poetry, the World War I artists told their stories. Both poets and artists tried to make sense of a war that began with cavalry riding horses and quickly became a murderous assault by weapons technology in the stalemated trenches.

An excellent introduction to the “official art” and the “artists’ art” is Art from the First World War by Richard Slocombe and published by the Imperial War Museum in London. A small paperback (costing $20 in the U.S. but less than that if you happen to visit the museum in London), it includes some of the major works which resulted from the war, including some of the desolate battlefield scnes by Paul Nash, horrific landscapes by john Nash, and works by C.R.W. Nevinson, Wyndham Lewis, David Bomberg, and several other artists.

Whitechapel at War, noted above, focuses on a relatively small group of artists. It includes three essays on Isaac Rosenberg, the Whitechapel group collectively, one on how their works began to become known through print, and a final chapter a “Whitechapel Girl,” Clare Binberg, who was associated with the group but did not share their military experience. 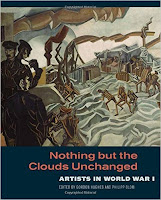 A third good resource is Nothing but the Clouds Unchanged: Artists in World War I, edited by Gordon Hughes and Philipp Blom, which is the exhibition book for “Images of War, War of Images” show at the Kemper Museum. While the first two books focus on British artists, this one is more expansive, encompassing artists and art from all of the primary nations at war during the conflict – British, French, German, Russian, Italian, American and others. Like the exhibition itself, it goes beyond paintings and includes recruiting and war bind posters, magazine illustrations, photographs, and even how soldiers decorated their helmets. The essays (and illustrations) are packed with information on how the war was visually “told,” both during and after the conflict.

The “Images of War, War of Images” exhibition is in its final days at the Kemper – it closes Jan. 4. If you’re in or visiting the St. Louis area, it is well worth your time.

“Some Corner of a Foreign Field” by James Bentley

The World War I Poets in the War

The Most Famous Poem of World War I

The Poetry of World War I

The Poems the Soldiers Read in World War I