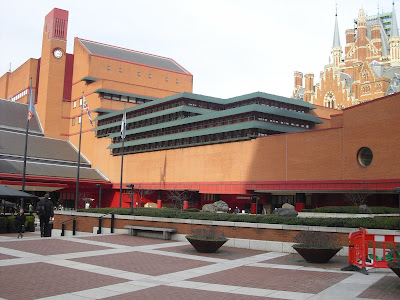 The audience at the British Library for a discussion about a new annotated edition of T.S. Eliot’s poetry was largely an academic one: professors, students, researchers with the British Library, likely a few poets. And two Americans on (mostly) vacation.  Our trip was punctuated by poetry and writing highlights: a Keats Walk in Hampstead and Hampstead Heath; a visit to the Charles Dickens Museum; the Samuel Johnson House; a visit to Merton College at Oxford (Eliot’s college and where J.R.R. Tolkien taught).

Collecting and annotating the poetry of a write like T.S. Eliot is fraught with challenges and difficulties, not the least reason being Eliot himself editing his poems over time, or manuscripts of the same poem with variations, and one version published in one collection and a slightly different version published in another.

Photograph: The British Library in London by Mohammed Abushaban via Wikimedia Commons.
Posted by Glynn at 5:00 AM