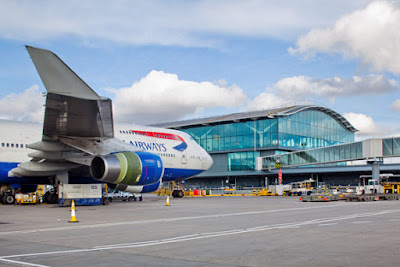 I try to remember when the reality of what had happened to us finally sunk in. I had a glimpse when I saw thousands camped out at the hospital, praying for Mike’s survival. And on the plane to London, I saw the looks of deference as we walked through the cabin to greet passengers. But I knew for sure when we walked into the terminal at Heathrow, with the archbishop and the prime minister waiting for us, almost surrounded by television, flash cameras, and mobiles held high to get a shot of the new royal family.

Photo: British Airways plane at Heathrow Airport.
Posted by Glynn at 10:27 AM