"The Baker's Secret" by Stephen Kiernan 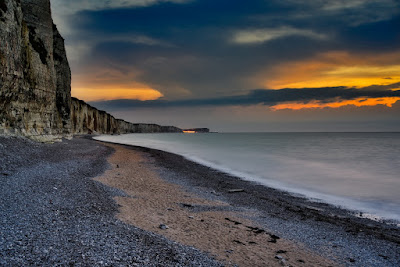 The small town of Vergers lies a short mile from the Normandy coast in France. It has been under the fist of the German occupying army for four years. Jews have been shot or taken away. Men 15 years and older have been sent to Germany, to work in munitions factories. The people remaining survive as best they can – a few in the Resistance, a few collaborators, most just trying to survive.

Emmanuelle is 22 years gold and has become the town baker. She had been apprenticed the the long-time baker, but he was Jewish, and she and the other townspeople had seen his shop wrecked and the man shot in the head. She is required to bake the baguettes for the German army commandant, 12 loaves picked up every morning like clockwork, the flour provided by the Germans. But Emmanuelle has a secret; she grinds straw into powder and adds it to the dough. Doing so allows her to have 14 loaves instead of 12. She uses the extra two loaves to help people stay alive. 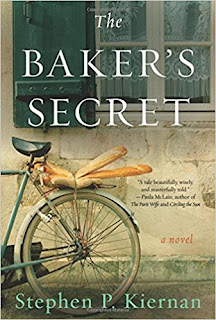 But her secret is bigger than two loaves of bread. She’s able to build an underground economy, supplying food needs and occasionally other things – a light bulb, a little gasoline. Without hope for liberation, Emmanuelle is the pivot of hope for keeping people alive.

And it’s June 5, 1944. The day before the D-Day invasion. The last day Emmanuelle will bake bread for the German commandant. The last day many of the Germans and the people she knows in her town will be alive.

The Baker’s Secret by Stephen Kiernan is Emmanuelle’s story, and what a story he tells. It’s filled with memorable characters like Odette the café owner, The Goat who secretly hides ammunition, Monkey Boy who climbs trees, Emmanuelle’s grandmother Meme, and the church priest who walks a fine line between collaboration and resistance, but can always be relied upon to show up with his wheelbarrow to bury the dead.

Kiernan, a former journalist, is the author of two previous novels,The Curiosity (2014) and The Hummingbird (2016), and two non-fiction books, Last Rights: Rescuing the End of Life from the Medical System (2007) and Authentic Patriotism: Restoring America’s Founding Ideals through Selfless Action (2010). His work has won more than 40 awards. He lives in Vermont.

We’ve seen the story of Nazi occupation and the story of D-Day told over and over again. What we haven’t seen as much is the story of the people in French villages and towns who experienced both. Kiernan points out in the afterword that some 4,400 Allied soldiers died on the first day of the invasion, with some 9,387 eventually buried in military cemeteries in France. But it’s estimated that more than 50,000 French civilians died in the invasion and the days that followed.

The Baker’s Secret tells their story.

Top photograph: A beach in Normandy by Philippe D. via Unsplash. Used with permission.
Posted by Glynn at 5:00 AM