"Living a Life of Yes" by David Rupert 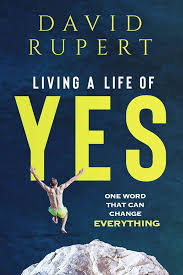 I remember about four years ago when pictures of Jordan began showing up on David Rupert’s Facebook page. The famous ruins of Petra. Mount Nebo. The Jordan side of the Dead Sea. All scenes of sites well known from the Bible but not on the usual tour of the Holy Land.

Rupert was there because he said yes. He had made a New Year’s resolution to say yes to every opportunity God put in front of him. The first one arrived four days later – an invitation from the Kingdom of Jordan to visit and write about the Christian sites in that country.

It was the first time he said yes, but it wasn’t the last. And now he’s written a book: Living a Life of Yes: How One Word Can Change Everything.

It’s an easy, engaging read, but it’s also thought-provoking – and heart-piercing. Rupert is a writer; his 9-to-5 job (which understates the actual hours) is as a strategic communication specialist. He knows how to write well, and he knows how to write to communicate well. And in Living a Life of Yes, he makes a convincing case.

Note that saying yes doesn’t mean saying yes to everything. It’s saying yes to “everything God puts in front of you.” Sometimes it’s hard to tell the difference, but Rupert gives practical, prayer-grounded advice on how to do that. When presented with that kind of opportunity, something more than “thoughts and prayers” is demanded, and he explains how to go beyond one of the tritest expressions in American culture today.

Through 12 chapters, he explains what happened to him when he said yes; how he overcame fear and doubts; how to get ready for changing the world (because that’s the size of the opportunity); the difficulties you can face when saying yes; and real-world examples of people living a life of yes. And he has a challenge: “There’s a time to read and hear about other people, and then there’s a time to be like those other people.”

In addition to his full-time job, Rupert leads Writers on the Rock, a large writing community based in Colorado. His articles have appeared in Christianity Today, Real Living, Breakpoint, The High Calling, and other Christian and leadership publications, and he blogs at Patheos.org. He and his family live in Golden, Colorado.

So, consider Living a Life of Yes. Read it, but you need to do more than read it.

Thanks for the recommendation Glynn. I'm going to get this book since I have corresponded with David and read his blog. I value your recommendation and review.

Glynn, you have always been an encourager, someone who blesses others with your words. Today, it's my turn to receive your blessing and I am so grateful. Thank you, friend.