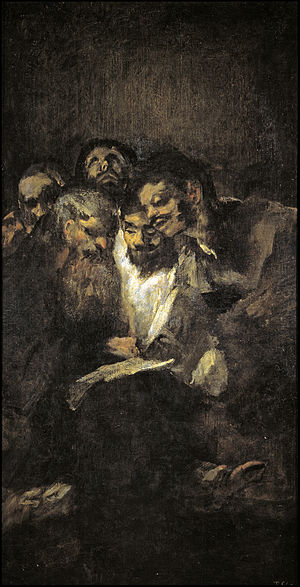 This past Thursday was Holocaust Remembrance Day. At Tablet Magazine, David Mikics discusses a “fierce, brief book” about the Holocaust, in which author Wendy Lower considers a photograph that many still don’t want to face or acknowledge. And Jeff Dunetz at The Lid looks at how Dwight Eisenhower assured that the horrors of the Holocaust would never be forgotten.

In any discussion or recognition of banned books, Mark Twain’s Huckleberry Finn is almost always included. The people demanding its banning, exclusion from libraries, and removal from school reading lists usually haven’t read it, but instead rely on what others tell them (a growing problem in this age of social media). Christine Norvell at Front Porch Republic offers a lesson in how to teach banned books.

Since the beginning of the year, I’ve been part of a small group reading all of Shakespeare’s plays and poetry in 2021. In high school and college, I read what the curriculum required us to read – Julius Caesar, Macbeth, Hamlet, King Lear, and A Midsummer Night’s Dream. I read Romeo and Juliet only after seeing the 1968 movie version directed by Franco Zeffirelli. And both a reader and theatergoer can find great pleasure in the language of the bard. Livia Gershon at JSTOR Daily asks a surprising question: are we (and performing actors) getting Shakespeare’s rhythms all wrong?

Looking back at a day when small-town newspaper editors could be heroes – John Miller at Poynter.

Why Murder Mysteries Are a Lot Like Science, According to a Neuroscientist and Novelist – Erik Hoel at CrimeReads.

In Praise of Reading Aloud – Ali Kjergaard at Mere Orthodoxy.

Saints and Sinners in a History-Haunted Age – Matt Hoberg at Church Life Journal.

A Runner in a Race – Patrick Ramsey at Reformation 21.

Chains, Change and Chesterton – Joseph Pearce at The Imaginative Conservative.

“Night Verses” and “The Hills and Hours” – Brian Palmer at Society of Classical Poets.