“A Pretty Folly” by Charlie Garratt 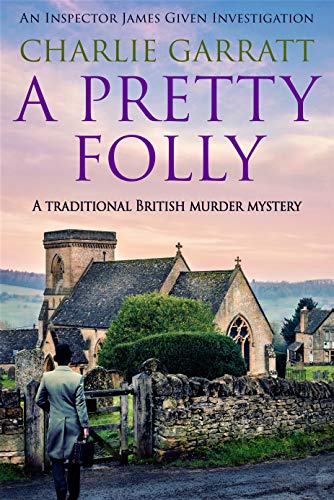 It is one strange case that Inspector James Givens of the Warwickshire Constabulary finds himself in charge of. The body of what looks like a young girl is found in the crypt of the chapel of the local school. The chapel is hundreds of years older than the school itself, and the crypt may be older still. The girl’s body is posed, her hands tied around a crucifix. There’s a hammer lying nearby.

Because of the conditions of the crypt, the body is essentially mummified. The medical examiner can say when she died or how she died. The only thing that suggests foul play is the posing of the body. And there’s nothing to identify who she is. Givens discovers he’s looking for a needle in a haystack.

His professional life is also complicated by another case he’s looking into – growing vandalism against Jewish businesses. It’s 1938 Britain; Hitler’s making moves on Czechoslovakia on the continent and Oswald Mosley and the British Union of Fascists is demonstrating that Britain is no stranger to hostility to Jews. Givens himself is Jewish, having Anglicized his name for professional purposes. He’s run into hostility and prejudice, right there among his own police colleagues.

And the Sicilian Demme brothers are lurking in the background, possibly connected to the vandalism which soon turns to arson. Givens has old scores to settle with them, unless they get to him first.

A Pretty Folly by British author Charlie Garratt is the second in the Inspector James Givens series. It’s an mystery filled with disguised or mistaken identities, a multitude of suspects, and a problem of figuring out how the victim actually died.

Garratt is the author of four Inspector Given mysteries, including A Shadowed Livery, A Pretty Folly, A Patient Man, and Where Every Man. He also published several community participation guides, until he retired and began writing short stories. One of those stories led to his first novel, A Shadowed Livery. He lives in Shropshire in England.

A Pretty Folly is rich with actual historical detail – the rise the Nazis, the plight of the Jews in Europe, Oswald Mosley and his thugs in Britain – coupled with one unusual murder story. It’s a highly entertaining read.

A Shadowed Livery by Charlie Garratt.