"A Shadowed Livery" by Charlie Garratt 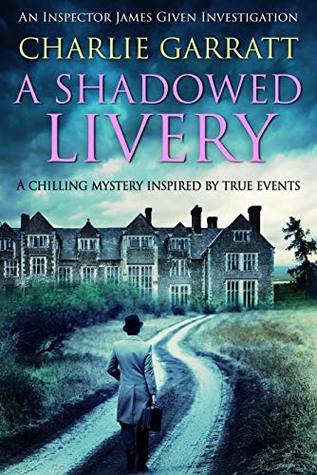 It appears and open-and-shut case. The son of Sir Arthur Barleigh, crippled after an automobile accident, is shot and killed while in wheelchair. His mother then apparently turned the gun on herself. A short time later, the young man’s fiancée shoots herself in the son’s bedroom. It appears to be murder-suicide-suicide. An inquest is hurried and a verdict rendered just as quickly.

The problem, Inspector James Givens of the Warwickshire Constabulary realizes almost immediately, is motive. He’s reviewing the case because the newspapers are pressuring his boss to take a more thorough investigation. Lady Barleigh wasn’t happy about the impending marriage, but was that sufficient to kill her son? Aided by the local constable, Givens sifts through the case, but he doesn’t have much time. His boss wants a quick review.

It’s 1938: Neville Chamberlain has just returned from his meeting with Adolph Hitler in Munich and is proclaiming “peace in our time.” Pro-Nazi Sir Walter Mosley has his thugs beating up Jewish merchants in England; James just attended a hanging where one such thug was hanged by the neck for murder. And it’s all becoming more personal, because “James Givens” is his English name; he’s actually the son of a Russian Jewish immigrant who’s a tailor in Birmingham.

A Shadowed Livery by Charlie Garratt is the first in the Inspector James Givens series. Garratt has created a police detective hero who is conflicted by his Jewish heritage, in love with a woman who is involved in the case, chased by two Italian goons seeking revenge, dogged by a crooked colleague – and who is relentless at getting at the truth.

Garratt is the author of three other Inspector Given mysteries, including A Pretty Folly, A Patient Man, and Where Every Man. He also published several community participation guides, until he retired and began writing short stories. One of those stories led to his first novel, A Shadowed Livery. He lives in Shropshire in England.

The story is an effective and realistic interplay between the murder case at hand, deteriorating conditions in Europe, and the situation at home marred by Nazi sympathizers. A Shadowed Livery is an engrossing and entertaining read.