"The Boy Who Cried Christmas" by Dennis Bailey 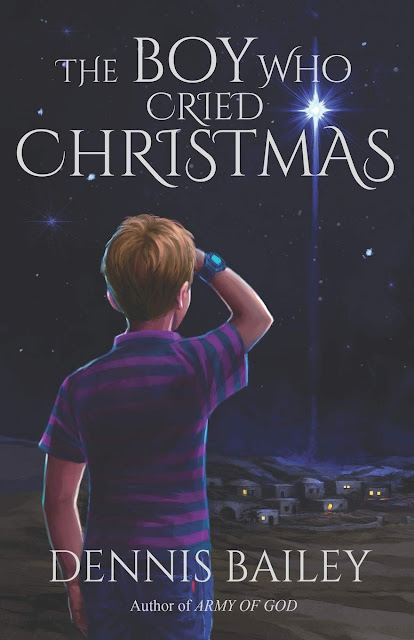 Logan Ailshie is nine years old. He lives with his mother and stepfather in a condo in New York City. It’s nearing Christmas, and Logan is mostly focused on the gifts he’ll be getting, one of which he wants to open like now, and he’s not above throwing a tantrum to get it.

His stepfather refuses to have anything to do with Christmas, believing it’s a deceptive fairy tale. His mother was once a regular church attender, but she’s followed her husband’s wishes and avoided church. Logan’s stepfather is also always too busy with work to have much to do with Logan.

One night, Logan finds a homeless man in his bedroom closet. He and his mother had seen the man on the street, but Logan has no idea how the man has gotten into his room. The window is open, but the condo is 10 stories above ground. But Robert is no ordinary man. Nor is he homeless. He’s there to take Logan on a journey, back to ancient Judea.

When the boy disappears, FBI agent Marcus Garraway leads the investigation. The disappearance seems impossible; the boy couldn’t have flown out of the window. Garraway is dealing with his own angst about Christmas; it’s the day his wife died when a drunken driver crossed lanes. Inf act, Garraway is close to suicide.

Robert leaves Logan with a group of shepherds, outside the town of Bethlehem. And it’s there that Logan will discover the reality of Christmas and find a kind shepherd who cares for him like a father.

The Boy Who Cried Christmas by Dennis Bailey is the story of Logan, Robert, and Garraway, and how divine intervention saves a boy, saves a suicidal FBI agent, and reverberates across a dying, decaying culture.

Bailey is a retired police detective who is also the author of the novel Army of God, a suspenseful account of the story of Noah. He lives with his family near Charlottesville, Virginia.