“The Tragedy of the Republic” by Pierre Manent 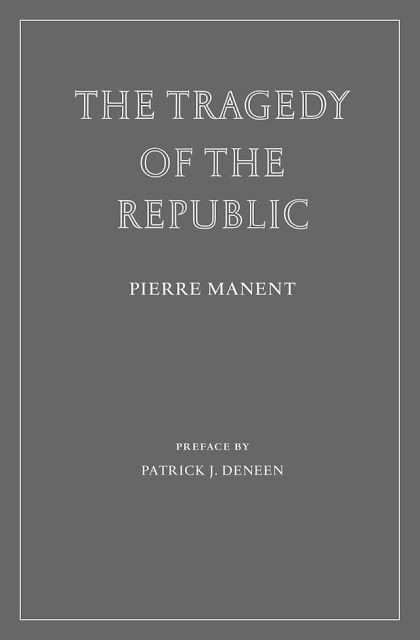 Wiseblood Books has been publishing a series of lengthy essays about contemporary culture. These include Duty, the Soul of Beauty: Henry James on the Beautiful Life by R.R. Reno; How to Think Like a Poet by Ryan Wilson; Poetry as Enchantment and The Catholic Writer Today by Dana Gioia; The Fortunes of Poetry in an Age of Unmaking by James Matthew Wilson; and several others.

Manent answers the question by examining two plays of Shakespeare, Coriolanus and Julius Caesar, with a special focus on the speeches and actions of three characters – Coriolanus, Brutus, and Cassius.

Shakespeare borrowed the story of Coriolanus from Plutarch’s Lives, as he did for several of plays. Plutarch described him as a Roman general who was successful in quashing several rebellions against the Roman government, sought political office, was believed to be overreaching, and was exiled. He joins with one of Rome’s enemies and is eventually killed. Many historians doubt his existence.

In Julius Caesar, (and in historical fact), Brutus and Cassius were key players in the successful assassination of Caesar. They were allies in the conspiracy, but their motivations were entirely different, as presented by Plutarch and Shakespeare. Brutus sought to remove what he saw as a dire threat to the republic; Cassius was a bit more self-interested but needed the cover of Brutus’s noble reputation.

Manent is professor emeritus of political philosophy at the Ecole des Hautes Etudes Sciences Sociales. His nurmous published works include Toqueville and the Nature of Democracy, The City of Man, and A World Beyond Politics?, among many others. He is known for being a classic liberal and a Euroskeptic.

The Tragedy of the Republic seems an especially apt discussion in the current American political environment. But Manent, perhaps unintentionally, also demonstrates something else, and that is the value of the traditional Western canon of literature in creating an understanding of vital contemporary events.