Last week, my wife and I did our third annual Long Mother’s Day Weekend Pilgrimage to Chicago. We go with one primary purpose – a singing duo named Chad and Jeremy. She first met them when she was 12, which was at least, uh, well, a fairly long time ago. For the last three years, they’ve performed two or three times in Chicago during the Mother’s Day weekend. This year, the Friday night concert was at Fitzgerald’s in Berwyn, and the Saturday night concert was at SPACE in Evanston. We stayed downtown, just off Michigan Avenue.

We love Chicago. We got to eat at Emilio’s Tapas in Streeterville, a short two blocks from our hotel (I had small plates – salad, grilled calamari and a black bean soup that was spectacular; my wife had grilled salmon). And a bottle of LAN, a Spanish wine that’s sort of like merlot but isn’t. Sitting at Fitzgerald’s Friday night before the concert, we were catered by Wishbone Restaurant, adjacent to and part of Fitzgerald’s. Wishbone specializes in something called “Southern Reconstruction Cooking,” and I don’t know if the reconstruction refers to how they’ve redone southern food or the period after the Civil War. Either way, I had the crawfish etouffe, which was good but I had to scarf it down in record time because the concert was due to start and we were sitting right in front. We did shopping on Michigan Avenue (Johnston & Murphy and Nordstrom’s, you’re welcome). And we walked, oh, man did we walk. Fifteen blocks to Navy Pier, then at least that or more to the Art Institute, and then about 10 blocks home. And we walked around the huge exhibit of Matisse at the Art Institute – I had to sit and rest four times. The exhibit is worth its own blog post; it was about how Henri Matisse reinvented his art from 1913 to 1917. On Saturday, undeterred by rain and wind, we went to the Celtic Festival in Millennium Park.

Chad and Jeremy were great. The music leans to the ballad form, but these guys are professional entertainers – telling stories about the 1960s, being on television shows like Dick Van Dyke and Batman, singing beautiful love songs and occasional funny ones, like a riff on an Eagles’ song entitled “Avocado.” Chad and Jeremy are still making great harmony – and they first sang together in 1960. The two concerts in Chicago were hosted by Lilfest, which brings a lot of cool music to the city. 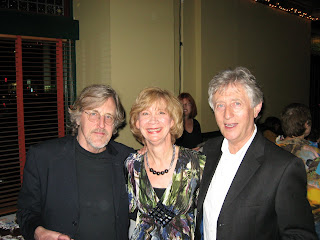 The most sobering sight was the Chicago Tribune newspaper on Sunday. Chicago is truly one of the great cities of the world – with an Illinois state legislature refusing to make the hard choices to avoid bankruptcy, the head of the Cook County suburban school district in a plea bargain over alleged theft charges, and the head of the transit authority killing himself by jumping in front of one of his Metra trains; he was being investigated for financial irregularities. Chicago is a neat city, but its politics make my home state of Louisiana look like a paragon of governmental virtue.

In spite of the political muck, we still love Chicago.

Related post: A Love Affair with Chad and Jeremy.
Posted by Glynn at 8:01 PM

the old windy city.
glad you two had a good time!

Ahh Glynn. Sounds like a time full of love and the makings of sweet memories. Crawfish, Celtic Festivals,
and good music all with an elegant woman on your arm...... Thanks for sharing and drawing us in.

Oh my. I remember Chad and jeremy -- I was living in France and their music played on Radio Caroline (I was just a kid -- honest!) How wonderful to be reminded of them this beautiful Wednesday morning.

Your trip sounds like fun -- chicago is one of my favorite US cities.

Been there many times :)

I need a vacation.:/

I've never been west of this East Coast.....but you've peeked my interest in the Windy City!

Oh, I love Chicago! We had friends who lived there for many years and we frequently drove up to visit them. That city is an endless well for exploration. The last time we went the tall ships were on the lake and it was amazing.

What a sweet tradition, Glynn.