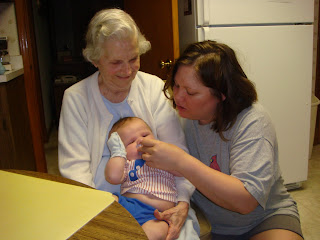 Lorraine was born in 1923, the fourth of six. There is one photo of her from her childhood – a blurry, rosy-cheeked little girl with her father kneeling next to her, his arm around her shoulder. She has a scarf in her hair, like girls wore in the 1920s.

Her adored father died in 1935 of a ruptured appendix, right before she turned 12. This was the Great Depression, and they were already living in one of the poorest sections of New Orleans – even in the 1930s, the Ninth Ward was a poor part of town, where people grew vegetables for the farmers’ market at the back of the French Quarter (still in operation today). With four children still at home, her mother went to work scrubbing floors at New Orleans movie theaters.

Lorraine remembers times when there was no food in the house. Nothing. She remembers what it was like to go to bed hungry. She remembers next-door neighbors – African-Americans – sharing food with them. This was 1930s New Orleans – but poverty and hunger didn’t know there was a color line. When there was food in the house, she remembers eating everything on her plate. Everything. She would require the same of her children. Occasionally, there would be a splurge with a dessert – a piece of buttered French bread with sugar sprinkled on it. Her children would grow up thinking “bread, butter and sugar” was a pretty cool dessert treat.

She was smart, likely the smartest of all the siblings. Her dream was to teach, and to teach Spanish. She took four years of Spanish in high school and was president of the Spanish Club. She wanted to go to college, but the fact that her mother could barely afford to send her through high school told her that college was not possible. Her second-oldest sister (who would become my godmother) had quit high school out of embarrassment – she couldn’t afford to pay $1.25 for the required gym suit.

In high school, she met a football player named Joe. He boarded at Holy Cross High School, just a block from where she lived. He was from Chicago, and she had stars in her eyes. They would marry in late 1942, right before he shipped out for Army duty in Europe. She found out she was pregnant after he left, and her first child, a boy, was born in late 1943. He had a problem with faithfulness, and he broke her heart, likely several times over.

She had a desire to achieve, but she gave it up (and gave up going back to work) because that little boy born in 1951 didn’t like what today would be called day care. He cried for two straight days, and she gave up the job.

To transport him to the kindergarten at the Lutheran church they attended, she had to learn to drive, something she never felt comfortable doing. She preferred taking the bus, and to see a movie (she loved movies, especially romantic movies) she and her son would walk a block to the highway and catch the bus for downtown New Orleans. Disney movies: Pinocchio, Bambi, Sleeping Beauty, Cinderella. Sometimes dramas that made her son cry. Or comedies like Some Like It Hot.

She wasn’t a great reader, but she read to her son, books like Grimm’s Fairy Tales and Bible stories for children. She encouraged her son to read; her first child wasn’t known for reading or scholarship and she didn’t want the same thing to happen with her second. In fact, the second son turned out be a lot more like his mother than his father – doing well at school, known for being somewhat distant and quiet, rather shy but also seeing everything that went on.

For the first 12 years of my life, she was the major influence on my life. My father started his own business – and often weeks would pass without me seeing him. But she was there. She was always there.

Jennifer Dukes-Lee is hosting a link-up for writing about a person who had a major influence on your life. Check her site at Getting Down with Jesus to see all the posts submitted.

What a wonderful tribute, Glynn. She's a beautiful lady. I remember butter and sugar sandwiches.

I love the way you see her, Glynn.

Thank you for giving us a glimpse. She sounds--I can't find the right word for how she sounds. Lovely isn't intense enough...but it's on the right spectrum.

One of your loveliest tributes, Glynn, and an honor to read.

for two days straight...well done, man.
bread, butter and sugar...my grandma would make that for me sometimes.

Nice tribute to your mother, Glynn. Interesting, all she went through. That generation gained something through that, I think that somehow we lacked.

I admire people like this, who quietly go about their daily life, but also see "everything that went on." I always feel like I have to give me two-cents worth.

Glynn, I'm so glad that you participated in this writing project. You always weave such a fine story.

Very nice. I think she sounds down-right tenacious, and I like that adjective, also the people it describes. I'm curious to know about your brothers. Such big age gaps. Are you close to them?

I love her hair. It's beautiful. Thinking about the brokeness she experienced and survived as a child and as a young married woman... I stand amazed at God's faithfulness to continually redeem throughout generations... working all things together for good. I feel privileged to have read this.

Hmm a beautiful woman with the sparkle of eternity on her eyes.
Can see where you get the sparkle from ...

Thank you for introducing us to Lorraine, Glynn. And as the story progressed, I was delighted to read of her decision to quit work (because her little boy couldn't endure day care), learn to drive, take you to movies, and read to you.

The strength of a mother pouring into her son...and now you rise up and call her blessed in your inimitable, artistic way.