Mindfulness on the Job 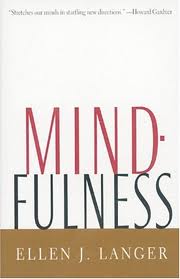 Corporate staff jobs have been essentially control positions, expressions by an organization to control its environment. (This goes back to the mass production model of business mostly associated with Henry Ford and the automobile, but that’s another story). Corporate lawyers, IT staffs, HR people, PR people and similar functions have been about control – controlling or mitigating external events and regulating and standardizing internal processes. The idea is an organization does all these activities to help its businesses be efficient as successful.

Organizational mindsets are, collectively, the organization’s culture. They are often self-sustaining as behaviors are rewarded or penalized and as people of like minds are identified and prepared for leadership.

When it works, such a culture can be rewarding for all concerned – executives, employees, customers, investors, vendors and all the other various constituencies. When it doesn’t work, a culture of control can still function like it does work, but requiring changes in how different social, economic and political realities are understood and acted upon.

I’ve told a version of this story before, but aspects of it apply to the discussion here. In the mid-1990s, I asked the IT department for help in creating the company’s first web site. I didn’t get laughed at, but I was politely refused. “The web is a flash in the pan,” I was told. “It’s like 8-track tapes. You’ll be wasting your money.” This was the clincher: “The future is not the web; the future is Lotus Notes.”

The person who told me that sincerely believed what he was saying. Behind the statement were very large investments the IT organization had made in Lotus Notes, including a lot of money and a lot of people (mostly programmers). It was, in other words, a “vested interest.” Because of the resources committed, no alternative would be, or could be, considered.

Within months, the folly of that commitment had become clear. The web turned out not to be a flash in the pan; in fact, Lotus Notes was beginning to look a lot like 8-track tapes. A new CIO arrived from outside the company, asked who was in charge of web development, and was told “well, there is this guy in PR.”

Yet the commitment to Lotus Notes remained stubbornly in place. After a few years of growing dissatisfaction, a “web front-end” was added to make the system work more like the web. It didn’t work very well. In the meantime, ignoring the web as a corporate activity allowed people all over the company to pursue whatever they wanted to pursue with web sites – and eventually more than 500 were created.

It took more than a decade (and a lot of money), but eventually the company abandoned Lotus Notes. There was a brief revival when it was renamed Domino, but the only result was a new name.

My own area of focus – corporate communications – is not immune. When change comes to any control function, it can be resisted, and often bitterly resisted. When the change prevails, it invariably comes from outside the function.

We need a better way to do these things.

Very interesting observations here, Glynn. 500 websites? Holy smokes. That must have been a thing to wrestle to the ground.

I really like what she is saying in this book, but also acknowledge that it's sometimes hard to rise above the mindless thinking when you are soaking in it.

The "system" was called something else where I worked but the results were the same. The lessons never got learned, only repeated. I do not miss being in a corporate environment.

That final note that Langer ends the chapter with is rather sobering: It is the successful companies who are vulnerable to mindlessness because they continue to do what works.

How does one combat that? I was thinking of something Guy Kawasaki talks about in Enchantment--that practice of conducting a premortem? Maybe doing this on a regular basis would help weed out stale practices.

Great post, Glynn. I think it's fair to say that you are quite the visionary. Is forward thinking rare in your business?

At one time I was a leader in World Class Competitiveness where people at Boeing were encouraged to be innovative and look at what will make their work more successful. I taught an innovation class off hours. Some great things came of it- the guys in manufacturing came up with a standard place to put their tools with outlines on boards so if you switched work stations you could find the tool you needed. People were brought in to observe workers at their desks and found lighting problems and posture issues that slowed people down. Adjustments were made. But when they moved to the engineering areas it became much harder. Part of my job was to document business processes so they could be improved. Most of it made sense but some of it didn't. Like forcing engineers to put their telephones in the exact same spot on desks : ) They don't use each other's desks... The most crippling change I saw was a new mindset that a manager doesn't need to be qualified in an area, or a people person. Their role isn't important. As a result managers rose up that drove the workers crazy. I'm glad to have been part of it, got a nice award. But sorry to see things go in the wrong direction. Perhaps things will turn around in business in the future. The best ideas come from inside, people want to succeed and do a good job- sometimes upper levels get so caught up in bottom line they forget to talk to the workers. Another shocking thing I heard in a management meeting- is that you want to place "star" performers with "low performance" workers so things will be balanced and all are equal... So much for innovation.

Thanks for this post! It was a fun walk through memory lane. Sorry if I got too wordy : )

What I see now the revolving door of "quality" programs. Different names, different approachs. We had fish, then quality leadership, then lean six sigma. We got green belts and black belts, but really, in the end, it's the same old, same old.