C.S. Lakin’s “The Unraveling of Wentwater”

A child is born in the village of Wentwater, which seems soaked in superstition and old wives tales. At her naming ceremony, the local witch predicts the child will be the ruin of the village – and the women gathered together immediately drive the mother of the child away, set the house afire with the baby inside, and calmly go on about their day. 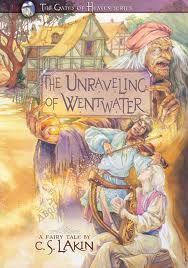 But the child doesn’t die; she is secretly rescued and taken to a place of safety, eventually landing in the arms of a childless couple in the Heights, the city in the mountains above Wentwater, where knowledge and reason rule. Years pass, the child comes of age, and is allowed to make a visit to Wentwater for the village festival. She meets a young man whom she falls in love with, and she meets the long forgotten prophecy.

And the prophecy still holds. The unraveling begins, and the young woman – named Teralyn – is at the center of it.

Welcome to the world of C.S. Lakin. Welcome to The Unraveling of Wentwater.

This is the fourth in the series entitled “The Gates of Heaven,” and there are three more to go. I should mention that this is the series of books that introduced and converted me to the fantasy genre. And this one is every bit as good as its predecessors.

Lakin has created a multi-faceted, extraordinarily detailed world. The reader gets the sense of life in medieval times, but this is a world where witches live in castles in swampy marshes and spirits occupy the lakes.

The novel has elements of familiar fairy tales – Sleeping Beauty, perhaps a dash of Snow White (sans dwarves) and Rapunzel (there’s even a short tower scene), to name two. But Lakin moves the story beyond the traditional fairy tale, and explores the contrast between knowledge and superstition, pitting village against town – and ultimately finding that both come up short. It is also a love story, and the story of what one is willing to sacrifice to save loved ones.

The Unraveling of Wentwater will be officially published in July; I was provided an advance reading copy by the publisher.

My reviews of C.S. Lakin’s books:

The Map Across Time

The Land of Darkness

Someone to Blame
Posted by Glynn at 5:00 AM

Email ThisBlogThis!Share to TwitterShare to FacebookShare to Pinterest
Labels: C.S. Lakin, fantasy, Gates of Heaven, The Unraveling of Wentwater

This book sounds so enchanting and inviting. I will have to check out this series. :)
Blessings to you!

My grandson [14] has read two of the three and thoroughly enjoyed them.