An Interview with Tripp York

Last month, I reviewed The Devil Wears Nada by Tripp York. It was unlike anything I’d read before – irreverent, funny, provocative, and ultimately deeply thought-provoking. An email exchange ensued, and Tripp graciously (and irreverently) agreed to an interview. 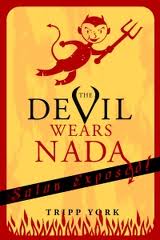 Tripp York, PhD, teaches in the Religious Studies Department at Virginia Wesleyan College in Norfolk, VA. He’s the author of more than half a dozen books, including his most recent, The Devil Wears Nada. He is the general co-editor of the forthcoming Peaceable Kingdom Series. The first volume in the series, A Faith Not Worth Fighting For, is now available. He says that when he’s not busy writing, he spends much of his time shoveling animal poop at the zoo. He finds sloths, squirrel monkeys and African crowned cranes to be far less under the influence of Satan than most of his human peers. Well, maybe not the squirrel monkeys.

You were raised in the Nazarene church – and you’ve been a Mennonite for some years. How did that happen?

I’m not sure I know how it happened, but I know why it happened: I didn’t want to end up in hell! (Laughs)

No, seriously. That may offend some folks—especially some lovely Nazarenes. I’ve been shaped by some absolute Nazarene saints, so ‘Go Team Naz’! But as a group, the Mennonites strike me as one of the few traditions that consistently take Jesus at his word. Which is precisely why I don’t really like being a Mennonite. It’s hard work. I find a lot of other traditions too easy. They love to add parenthetical remarks behind all of Jesus’s teachings. You know, like, “Love your enemies (except when your nation-state tells you to kill them).” “Give to all those who ask (unless the person is a drunk, in which case put your money in a savings account).” “Do not resist evil (unless democracy is at stake).”

That kind of Christianity is just not very interesting. Why bother with it?

Tell us a bit about what you teach at Virginia Wesleyan.

I teach World Religions courses as well as courses in Christian Ethics. This past semester I created a course for the school called ‘Sex, Violence & Christianity.’ As you can well imagine, we had lots to talk about.

In researching the book, you talked to a lot of people about their understanding of Satan—people in the pews (and people who’ve left the pews), pastors, the bodybuilding Faith Force, shamans, even a witch (I don’t know if I would have done that in person myself; maybe by email with a temporary Yahoo address?). You were looking to see what you could learn about God by learning what people understand about Satan. What did you find out?

That most of us are heretics! (Laughs)

And the wiccans I spent time with were far more generous than a significant number of preachers I interviewed. Some of those ‘ministers of the good news’ were incredibly hostile. There were times when I wished my interviews with them had been via email with a temporary Yahoo address. 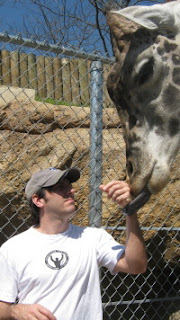 Yes, sir. I think that would be correct. And thanks for the compliment…that is, calling it funny. I’m still trying to convince my mom that it’s supposed to be humorous. She’s not convinced. Maybe she’ll take your word for it!

How can we understand Satan more Biblically?

That’s a really tricky question. The bible, obviously, is not self-interpreting. It’s always read through a particular lens that betrays a specific economic and social location. I’m afraid there is no quick answer to this question other than surrounding ourselves with a wide array of theological sources that date back two thousand years. We need all the help we can get. I know I do.

I understand you’ve done seminars related to work and the workplace. Can you tell us about that?

I’ve taught seminars that explore the relationship between meaning, significance, work, and how all of that ties into Christian vocation. I’m very interested in how Christians understand work, its purpose, and what sort of role it plays in making a difference in our communities as well as in the body politic that is the church.

St. John Chrysostom was once criticizing some of his parishioners for their comments about the homeless. Just like today, Christians in the 5th century often carried very haughty attitudes toward those who were not employed. They didn’t want to share their goods with the homeless because, as some of them suggested, “They should get a job and earn an honest living.” Chrysostom found their response to be rather curious and quickly pointed out that many of his parishioners worked jobs that were more morally corrupting than not working at all. Now that’s interesting! He tells them they have the kind of jobs worse than not having a job at all. And work is how most of us will spend the bulk of our lives, so having theological conversations about how we spend the majority of time seems important. What we do matters. Which is probably why I need to find a more meaningful job than being a religious studies professor. It’s a soul-thieving racket, but the hours are wonderful.

Related: My review of The Devil Wears Nada.
Posted by Glynn at 5:00 AM

Great interview -- I love his sense of irreverence!

He's quite the interview subject. What a hoot he must be in person.

Tempted to read this!

this book is now on my to-read list. can't wait. thanks!