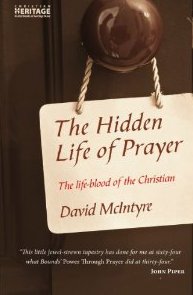 Time got away from me today, and I missed my blog post on Chapter 3 of The Hidden Life of Prayer by David McIntyre. The discussion is being hosted by Tim Challies over at Informing the Reforming. The chapter is about the direction of the mind during prayer, and it’s a good one – realizing the presence of God, being honest in prayer, and faith in prayer. I wish I had had time to write about it.

The week started with good news – the doctor’s office called with test results we’d been waiting for, and everything was OK. I haven’t said much about this except to family, but for a few weeks the possibility of surgery was there. But the tests came back negative.

Things have been busy at work and at home (things are always busy at work). Mornings and evenings at home have been revolving around watering plants – a bunch of new plants were put in, the weather’s been dry, and so we’re running around with sprinklers and soaker hoses.

When I’m not watering (my wife does it, too) (she would want me to mention that), I’ve been focused on the writing. The manuscript for A Light Shining went to the editor and publisher Monday night. Getting it into final shape has been a rather intense experience, but it’s done.

This morning, I started working with a personal trainer – and we’ve scheduled out the next five weeks, twice a week, for “strengthening the core.” This is part of my recovery from my back problems, which started almost exactly one year ago on the Saturday before Father’s Day. I finished with physical therapy in early April. The trainer comes from the same school of thought as my physical therapist – and that’s the School of Sadism. Every part of my body feels sore right now.

I was able to get a bike ride in last night, and once again saw Mr. Beaver. The beavers are new. I’ve seen deer (almost crashed with one once), wild turkeys, the usual rabbits and birds, and once even an eight-foot-long black snake stretching the entire width of the two-lane trail I was riding. But the beavers are new this year. This one was right next to the pavement of the trail, gnawing contentedly away on a plant. Fortunately, he ignored me.

I hope to be back to regular posting tomorrow. But please do check out Tim’s discussion on The Hidden Life of Prayer.
Posted by Glynn at 3:47 PM

Smiling at that! I know the pain!

Oh, and how do you do it? How do you read SO many books and write so much?

It's rather impressive, really. :)

Trying this comment again... I thought the capcha said "it pervert" but it might have been "it penvert".

How much would I have to pay you to remove the capcha? :)

Really glad about your non-surgery news. That is never fun. And actually, in a very GOOD way, very glad to know that even you occasionally run out of time. Otherwise, I'd have to believe you've got super powers of some sort.