You will never hear of any organization – business, government, non-profit (including religious) – say that creativity is no value. No one posts a sign over the building door that says “Abandon creativity, all who enter here” or “Leave your imagination at the door.”

Yet, as an executive I once wrote speeches for always said, “Policy is what you do, not what you say.” 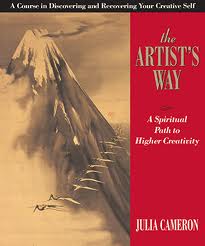 The fact is, in organizational settings, we like to strangle creativity in the cradle, if not sooner.

I might even go so far as to say that most workplaces want work as opposed to creativity – even if creativity will save money. We are encouraged to work long and hard. Workplaces like workaholics – people who live their jobs 16 hours a day (and longer).

I know this. I speak from experience.

As Julia Cameron points out in The Artist’s Way: A Spiritual Path to Higher Creativity, workaholism is a self-inflicted block on creativity – one among several, including food, alcohol, dry and desert-like times, fame, sex, and even competition with your peers. (Cameron has an interesting discussion, in which she contrasts the spirit of competition with the spirit of creation.)

I once worked at a place that offered a rather toxic combination of many of these things. Long hours were encouraged and expected. People were encouraged to compete against their colleagues, with the inevitable back-stabbing and politics. The most proficient politicians were promoted. A “blame culture” prevailed, in which taking risk, trying new things and stepping outside a very small comfort zone were all discouraged.

Not for nothing did the company stay in continual reorganization.

In that environment, the choices were two: go with the flow, or go against the flow. Both could be done. Both had costs.

Creativity can be a threatening thing to an organization, because it leads to change, and the upending of carefully constructed political systems, and the threatening of someone’s perceived influence and power.

But creativity is equally threatening to individuals, including those of us who try to practice it, and for very similar reasons: it leads to change, it upsets the way we’re used to doing things, and it can often force a sense of honesty when you would prefer to remain in ignorance.

So you take refuge in workaholism. You work harder. You pay less attention to your family and friends. You don’t volunteer at church or with the local scouting troop. You bury yourself in a busy-ness that is only the appearance of work, and not anything like God intended our work to be.

And while we can blame “the office,” management, our colleagues or all of the above, the fact is that we are the ones making the choice. And we will choose the creativity block of workaholism because we find a benefit of some kind – safety, security, maintaining the status quo, avoiding painful decisions, preserving our empire or any of a host of other things we tell ourselves we need or want.

But this is not the way it’s meant to be, and deep down, we know it.

Led by Lyla Lindquist, we’re discussing The Artist’s Way over at TweetSpeak Poetry. Today’s discussion concludes with the last three chapters of the book. I chose to focus on chapter 10, “Recovering a sense of Self-Protection,” and plant o continue posting for two more weeks on the two remaining chapters.
Posted by Glynn at 5:00 AM

I very much appreciate how you've rooted the concept of creativity in the workplace experience, and the honesty with which you describe the choice being made. The lesson and especially the costs could not be clearer.

Fortunately, these seasons are brief. I can't stay away from creativity for very long before I start losing my mind (and patience, and happiness, and general well-being).

Where I work -- even in a supposedly creative job -- the lines are very thickly drawn and woe to those who cross them.

Creativity means you are continually ask why and how we can do things better. Smart managers will foster creativity.

its a bit of a paradox, isn't it. Employers want 'creative thinkers' but not necessarily creativity...

Fear
We hold
Holds us
Ties
And knots
Tangled in
Lies

The creativity paradox definitely plays itself out in my workplace. We strive to be a non-traditional law firm, but "traditional" is safe and familiar and, for many people, that's a better choice than the risk that comes with creativity. Even though it often feels like running into a brick wall, there are those who remain committed to evolving, and for that I am grateful.

I find myself in an interesting paradox - management above me is very encouraging of creativity, and even developed a position to think about the why we do what we do, and how can we do it better. The problem often comes in the implementation. Management is behind it 100%, but those that have to actually make the changes are rather resistant. I struggle to keep myself from feeling squashed by the naysayers, and to continue being creative, even if it takes longer to implement some of the changes.