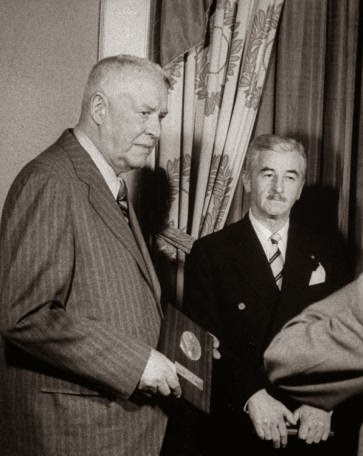 Today is the beginning of National Poetry Month, and we have a poetry dare from Tweetspeak Poetry.

It sounds simple: read a poem a day, preferably from one poet. Easy enough. But then you need to write the poem out to see how it feels, and then (on Wednesdays) go over to Tweetspeak and join in the discussion.

Actually, I think this is a pretty cool idea.

The book of poetry I decided upon for my response to the dare is The Collected Poems of Wallace Stevens. If I have a favorite poet, it’s Stevens, one of the three greats of modernism (the other two being T.S. Eliot and Dylan Thomas). My edition is the twentieth, published in 1980. It was first published in 1954.

And the first poem in the collection is the one I read for today, “Earthy Anecdote:” 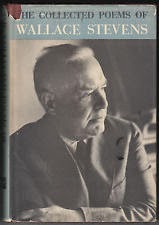 If you’re so inclined, join in the fun. All the information you need for the dare is at Tweetspeak Poetry.

Photograph: Wallace Stevens and William Faulkner at the presentation of the National Book Award to Faulkner. Photo via Lumpy Pudding.
Posted by Glynn at 7:00 AM

I've joined Glynn. I chose (from Maureen's suggestions) naomi shihab nye. I have never read any of her poetry but am looking forward to this.