A Visit to Impressionist France 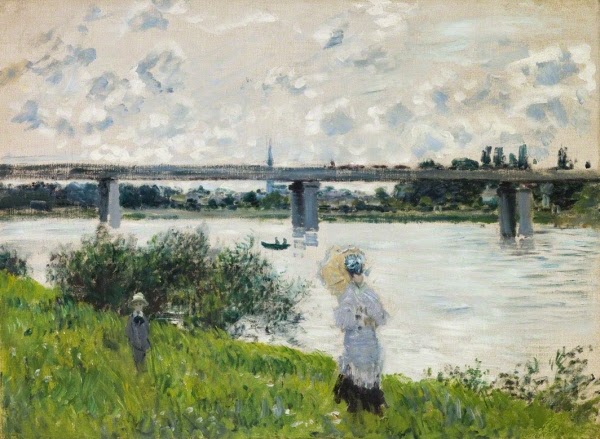 Tuesday night, we went to a wine-and-cheese reception at the St. Louis Art Museum. The reception was for members only (they do member-only events on a regular basis), and this one included either audio tours or docent-led tours of the museum’s latest exhibition, Impressionist France.

The exhibition was in the museum’s new East Building, which opened last year and is mostly dedicated to contemporary art (lots of Gerhard Richter paintings there, which I generally like and my wife generally doesn’t). And what an exhibition it was – almost a century of French photography and painting, arranged by themes but all generally aspects of the building of France as a nation.

We chose to do one of the docent-led tours, which started with a short discussion by Simon Kelly about the exhibit, French Impressionism, and the importance of photography to Impressionism. On the tour, our docent moved us to and from about 10 stops, focusing upon a particular painting or photograph to represent specific points. In addition to sharing what was clearly a lot of knowledge, she carried with her laminated photographs of the painters and photographers which she would pass among the tour group.

As we walked, observed and listened, I began to meditate a bit on art, and why it has come to be something much more important now that I’m older than when I was young. We’ve always enjoyed art and art museums, going back to a spectacular Cezanne exhibit at the Museum of Fine Art in Houston in early 1978. But it seems more important now, more engaging, and we try to include it whenever we travel.

I don’t think it’s just us. This seems to happen with age. As one gets older, one gets more interested in art. Perhaps it’s because older people have more leisure time (or disposable income). Looking at the crowd at the reception last night, I would say more were over the age of 50.

I think it might be someone else, too. As I’ve aged, I’ve come to see art as some akin to divine creation. Whether it is literature, art, music, photography, or other artistic endeavors, creating something “out of nothing” is something of a human echo of the original creation. Part of what it means to be made in God’s image is to be made in his creative image; it’s almost as if we can’t help ourselves – we are made to create.

If you have the opportunity, you should see this exhibit. We’re going back, and likely more than once. The creators of the works on display read like a history of French photography and art: Le Gray, Corot, Rousseau, Monet, Pissarro, Degas, Cezanne, Manet, and Morisot.

And I’ll try to figure out where they put the Gerhard Richters in the meantime.

While I enjoy very much the work of the Impressionists, I have to say I'd probably be spending much more time with Richter's work.

showing until july sixth i see.