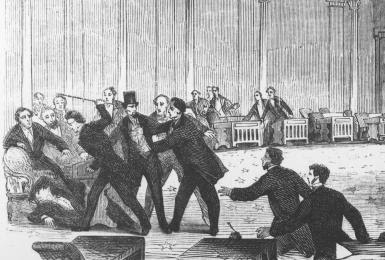 The 1850s were a tumultuous decade. It began with what many thought a hopeful sign in the ongoing battle between the free and slave states, the Compromise of 1850, which, among other things, attempted to manage new territories belonging to the United States. The compromise resolved a several-year political standoff that followed the Mexican-American War. 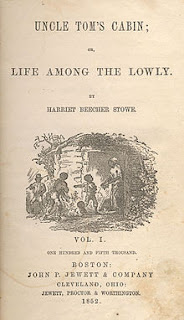 Whatever good feeling resulted from the compromise didn’t last long. A series of events began to punctuate sectional discord.

The Kansas-Nebraska Act was passed in 1854, and set aside the Compromise of 1850 in favor of a concept called popular sovereignty, extolled by Stephen Douglas (among others). The North reacted almost violently to the idea of a possible extension of slavery, as did the South to slavery being possibly precluded. The Whig party was destroyed in the South; Southern Whigs moved to the Democratic party. Northern Whigs would eventually be folded into the new Republican Party. Kansas and Nebraska became literal battlefields.

In May 1856, Senator Charles Sumner of Massachusetts gave a speech in the Senate, which he called his “The Crime Against Kansas” speech. He was an unbending abolitionist, and gave no quarter, attacking the Franklin Pierce Administration, the South, and slavery. He singled out Senator Andrew Butler of South Carolina for a particular target. Butler’s nephew, Preston Brooks, a congressman from South Carolina, was so outraged that he went to Sumner while he was seated to his desk and beat him with a cane until Sumner was bloody and unconscious. Sumner would not return to the Senate for three years. Brooks was censored by the House and resigned, but was reelected almost unanimously. Until his sudden and unexpected death a year later, Brooks was celebrated by many for upholding the honor of the South.

T he Dred Scott decision by the Supreme Court in 1857 was hailed by the South and outraged the North, breathing additional life into the abolitionist movement.

And John Brown’s raid on the federal arsenal at Harper’s Ferry (then in Virginia and now West Virginia) in 1859 was seem by the South as what the abolitionists were really up to – an armed takeover.

The screaming rhetoric, the accusations, and the political impasse came to a head with the election of 1860. Amid a crowded field of candidates and parties, Abraham Lincoln was elected with a majority of Electoral College votes and less than 40 percent of the popular vote. A short month after his inauguration, Americans were literally at war with each other.

History doesn’t repeat itself. I hope. But here in the 2010s, we’ve become accustomed to the news media-inspired designations of red states and blue states. An event like the killing of 49 people at a gay club in Orlando is defined as either an Islamic terrorist act or prime evidence for gun control, and proponents of both scream past each other. The lunacy extends to the highest levels of the government, when the Justice Department releases transcripts of the killer’s telephone calls and “redacts” them to remove any possible support for the Islamic terrorist narrative. (A day later, the department released the “unredacted” version.)

It’s an election year. The screaming past each other is getting worse. Donald Trump says anything that comes to his mind, and we now have Senator Elizabeth Warren relishing her assigned role of attack dog for Hillary Clinton. If that was the extent of it, it wouldn’t be so bad.

But we have the millions on social media. The yelling that pours from newspaper editorial pages. The think tanks on the right and left. The Republican elites unhappy with Trump. The Sanders supporters unhappy with Clinton and believing the primaries were stolen. Third parties rattling their sabers.

Top illustration: A drawing of Brooks attacking Sumner in the U.S. Senate, 1856.
Posted by Glynn at 5:00 AM