The Natural Poetry of the Biking Trail 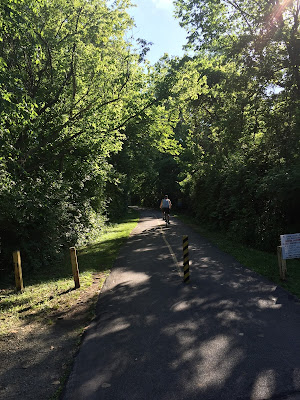 A Sunday afternoon in late May: I’m biking Grant’s Trail in suburban St. Louis, roughly 17 miles of an asphalt trail that at one time was a railroad track. Add the mile-and-a-half from my house to the trailhead, and I have a relatively flat 20-miles roundtrip.

I’ve been biking this trail since 2005, when it was three miles shorter, and a rather bumpy ride over old railroad bed gravel. My first ride over the pre-asphalt section led me to the discovery of the unexpected hole. Fortunately for my dignity, no one was nearby to witness the aging cyclist hit the hole, fly up from his bicycle seat, and spend the next few seconds (eternity in the moment) struggling to stay upright. I managed it. Barely.

But the unpaved became the paved, the whole was filled in and covered over, and the ride became less eventful.

Photograph: The eastern end of Grant's Trail in suburban St. Louis.
Posted by Glynn at 5:00 AM