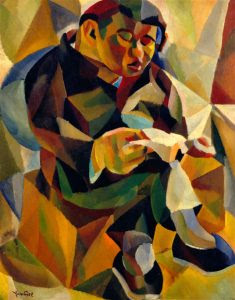 The campus political correctness craze strikes again – this time at Duke Divinity School. A workshop on racism turned into a faculty dispute – and ultimately the offending professor chose to retire, according to The New York Times. Although the controversy has been going on for some time, the Faith & Leadership blog of the divinity school – which usually covers all manner of religious controversies in its daily news and events posts – finally mentioned it with a link to the NYT article.

Some good poetry was posted this week (living in interesting times may spark good poetry). Of special note is a pairing of three poems by Reuben Woolley with three paintings by Michael Dikkel.

Fake news, which these days comes as much from the alt left as it does the alt right, is something all of us can take a hand in defeating, says PR guy Neville Hobson. He has good advice.

The Halls – Jason Ramsey at Altarwork.

The Book of Jonah – Jack Baumgartner at The School of the Transfer of Energy.

What Henry James Taught Me about Writing Suspense – Adam Blumer at Meaningful Suspense.

At the Firing Squad: The Radical Works of a Young Dostoevsky – Matthew James Seidel at The Millions.

Brave Prof Stands Up to Duke Divinity SJWs and Duke Divinity Crisis: The Documents Are Out – Rod Dreher at American Conservative. And A New Battleground Over Political Correctness – Duke Divinity School – The New York Times.

The Fear of Being Offended – Making Something Out of Nothing – David Rupert AT Red-Letter Believers.

How to play your part in fighting fake news – Neville Hobson.

It Was Cultural Anxiety that Drove White, Working Class Voters to Trump – Emma Green at The Atlantic.

Humility: The Key to Wise Decision-Making – Hugh Whelchel at the Institute for Faith, Work, & Economics.


Painting: Untitled (Seated Man Reading), oil on paper board (1927) by Yun Gee. More information on Yun Gee can be found here.
Posted by Glynn at 5:00 AM

Thank you for your inclusion in this fine list.

Thank you for including Meta/ Phor(e) /Play

Thanks for including my poems with Michael Dickel's paintings.